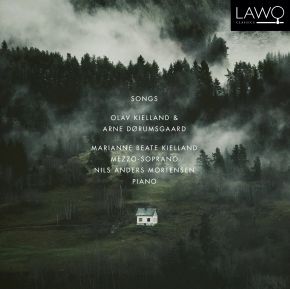 There is a fascinatingly large treasure trove of songs available in the National Library — for the most part fully accessible, but hardly used. The songs are written by male and female composers from Romanticism onwards. Some have composed only a song or two, others in the hundreds.

The song as art form is little used today. If performed, it is most often Grieg, the Norwegian composer who towers above his colleagues. But now, having sung Grieg for 25 years and recorded an album of Grieg’s songs as well, I have taken an interest in all the other untapped material in the National Library. I have begun with Olav Kielland and Arne Dørumsgaard — two composers of the last century who both found inspiration in traditional folk music.

Olav Kielland is not my grandfather, as some have wondered. We are related, but only distantly. My ambition was to record all his songs, and to the extent that we have recorded all the material available to us, we have realised our goal. For me, his tonal language is fantastic, from the simplest hymns and songs to his marvellous “The Last Spring”.

As for Olav Dørumsgaard, this album presents only a small portion of his total output. He has many songs that have not been published. We hope to devote an entire recording to Dørumsgaard’s songs at a little later date.