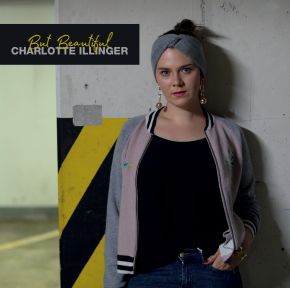 Every start is a gamble. Charlotte Illinger is young and loves a large repertoire. She gained some experience on stage as a member of the NRW State Youth Jazz Orchestra, the Federal Youth Jazz Orchestra and then during the four years when she studied at the Prins Claus Conservatory in the Dutch city of Groningen. She has also won a few prizes at "Jugend jazzt", the Haestens and the Sparda Jazz Award, and now she is in the finals of the Master's degree program as a Jazz Improvising Artist at Folkwang University in Essen, in other words, shortly before finally taking the scepter in her hand as an independent artist. Consequently, an album, which you present under your own name to the jazz world, has special significance. It is a calling card, maybe even a door opener for the coming years, in any case a self-confident statement, with which a new voice of the German jazz world is making her mark.

The direction is clear: Charlotte Illinger loves tradition. Her world is the music of the divas and original personalities, who created the cornerstones of modern swing-bop jazz singing in the 1950s and 1960s. Pieces such as "But Beautiful," for example, a charming song switching between major and minor cadences that Jimmy Van Heusen originally composed for the Hollywood film "Road to Rio" in 1947, and—among other things—was immortalized by Billie Holiday a decade later. Or "Old Devil Moon" by Burton Lane, composed for the Broadway show "Finian's Rainbow" in 1946 and which was discovered for jazz by the cool Miles Davis of the 50s. Others in turn come from a French composition such as Charles Trenet’s "I Wish I Love", has roots in the adult pop of a Burt Bacharach such as "A House Is Not A Home" or is a product of her own song workshop („The Way Of Time“, „At Night“ and „Furniture“) . All these songs reject the superficial, a rapid effect, and focus on the opportunities to develop independent moods and colors. In doing this, Charlotte Illinger does not leave the borders of the harmonious and closed, but instead cultivates the dimensions of her pieces from the point of view of a swinging, bopping, ballad-like and pondering world of sound.

She already found like-minded partners at the beginning of her studies in order for this to work. Jerry Lu plays piano in the quartet existing since 2012, a multiple prize winner of competitions such as "Jugend jazzt" and "Jugend musiziert”, who was awarded his Bachelor's degree at Cologne Music College last summer and has earned a reputation as an ascending big name on his instrument thanks to playing in numerous other bands and festival appearances in Europe. Caris Hermes plays bass, a pupil of Robert Landfermann, and on the road nationally and internationally at festivals and on concert tours in addition to her studies at Folkwang University in Essen. Niklas Walte is on the drums, who also landed at the university in Essen, came via Dortmund and Cologne and became known through his playing in the Soul Food Organ Quartet, among other bands. The saxophonist Paul Heller is also part of the team as a guest soloist and sound magician, who is an established name in the Cologne scene of the local jazz world. As a result, the album "But Beautiful" combines a mixture of sexy juvenile vocals, a pleasantly challenging repertoire and an elegant shaping band to create a debut, with which Charlotte Illinger takes the leap into the shark pool of competition.