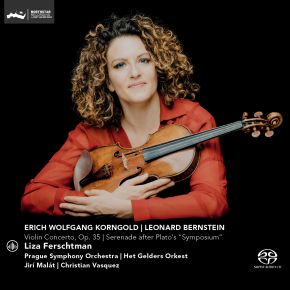 Korngold’s Violin Concerto was completed in 1945. This is a beautiful, late Romantic work that harks back clearly to Korngold's earlier compositional style, when he was a younger man living in Vienna. But had he really turned his back on film music he was used to compose in America? Every movement of the Concerto is scattered with fragments from a range of his film scores. The Violin Concerto was a huge success at its premiere, not least due to the performance by Jascha Heifetz as soloist.
The 1950s, a period when Korngold's career and indeed his life were drawing to a close, were a most productive time for Leonard Bernstein. He was achieving major successes on Broadway with his musicals.
The Serenade for violin, strings, harp and percussion had its premiere in Venice in 1954. There were two factors behind the composition. He had accepted a commission from the Koussevitzky Foundation. Also, he had long been promising a new piece for his close friend, the violinist Isaac Stern. Both of these commitments coincided in the Serenade, an extremely lyrical, five-movement work, akin to a violin concerto.

Prague Symphony Orchestra (orchestra)More information
05-04-2019 Classic Voice
"...the great Dutch violinist Liza Ferschtman is not part of the star system. However this almost provocative CD is of astonishing quality. Thanks also to the surround excellent recording of  two live flawless performances."
12-11-2018 Fono Forum
"

Liza Ferschtman need not fear any comparisons…(her) imaginative design of each phrase and the closeness of its conception!

"
02-07-2018 Fanfare
"I have nothing but enthusiasm for this release, and I look forward to getting to know this violinist’s work better. In an era dominated by conservatory-trained bots, she is the real thing."
29-06-2018 Audio.de
"

The Dutch violinist Liza ferschtman manages to do this with sovereign and unforced playing, which emphasizes the immense beauty of this music in a classically balanced way.

"
17-05-2018 The Strad
"Here again, Ferschtman takes a subtly shaded approach, the brilliance and energy of her performance thoroughly compelling. The moments when the texture clears and the solo violin emerges alone are particularly entrancing, and Ferschtman’s artistry and flair never falter."
11-05-2018 Gramophone
"All concerned respond to its moods with the utmost sensitivity, evoking the Symposium's varieties of love with a refinement that eludes bigger names and might have surprised the composer too. Ferschtman's intonation is well-nigh flawless."
04-05-2018 Music Web International
"A qualified welcome for this new disc; the Bernstein certainly gets a fine performance."
25-04-2018 Concerto
"Again, though, Ferschtman's playing makes the most of its strengths, eloquent, flexible and fleet-fingered."
13-04-2018 WDR3
"5 for performance and 5 for recording!"
13-04-2018 Luister
"Ferschtman brings Erich Wolfgang Korngold to life in a stunning way."
06-04-2018 Pizzicato
"

"
01-04-2018 Amadeus Magazine
"Her account is impassioned. Her great technical accuracy joins to a driving expressivity, in a travel among endless colour nuances"
26-03-2018 Deutschlandfunk
"

Liza Ferschtman interprets the piece as an intimate dialogue. The fact that the Dutch violinist reads the score more sensitively and is therefore probably more in line with the mood of the music and closer than her German colleague is especially in the fourth movement.

"
10-03-2018 HRAudio
"I’m very happy with this new combination Korngold/Bernstein and Liza’s reading of both."
28-02-2018 Opus Klassiek
"What seems to be incompatible is masterfully combined: that not only applies to Liza Ferschtman, but also to recording technician and editor Bert van der Wolf, who has made a harmonious whole of two incompatible recording spaces."
28-02-2018 De Gelderlander
"Swoon and swinging with violinist Liza Ferschtman in top form."
20-02-2018 NRC Handelsblad
"****
Liza Ferschtman sharply captures the character of the two concerts: the creamy mercy of Korngold with the Prague Symphony Orchestra under Jirí Malát and Bernstein's intense dialogues about the love she has with the Arnhem Philharmonic Orchestra and conductor Christian Vásquez. The violinist does what she can do best: painting colors with great musicality, evoking images and telling stories."

19-02-2018 Classic FM
"Win the Album of the Week of star violinist Liza Ferschtman"
16-02-2018 De Volkskrant
"Ferschtman finds the very diverse characters convincing, with freedom and imagination"
11-02-2018 Stretto
"A very beautiful performance, a masterful CD!"
05-02-2018 Musicalifeiten
"She keeps a clear statement with great care for details and adds more than a shred of extra inner meaning to the more meditative music ...
The fact that Korngold's Violin Concerto also sounds colorful and pretty passionate in all its bitterness, is trusted to Liza Ferchtman and makes this publication a deserved success."

02-02-2018 Mania
"Again a beautiful album by Liza Ferschtman that you should not miss."
30-01-2018 Radio4
"Dazzling! Radio 4 CD of the week!"
19-01-2018 Luister
"It brought him and us The Serenade to Plato's Symposium, musical dialogues about the beautiful and dark sides of love. The Gelders Orkest and violinist Liza Ferschtman opened the Bernstein year in the Netherlands with this masterpiece."
17-01-2018 Het Parool
"Violinist Liza Ferschtman shows with the Serenade another side of the composer in het Muziekgebouw."
14-01-2018 Daily Classical
"Both masterpieces touch you directly in the heart."
01-01-2018 BBC Music Magazine
"