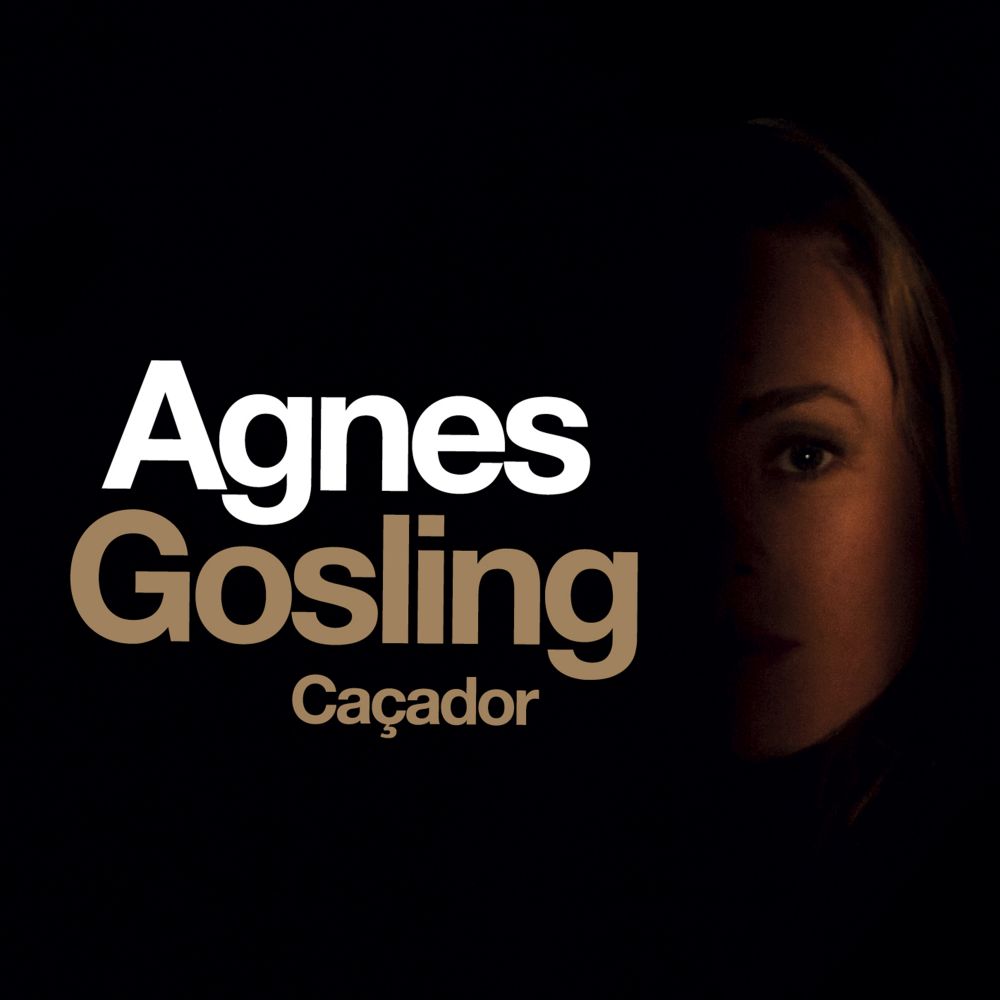 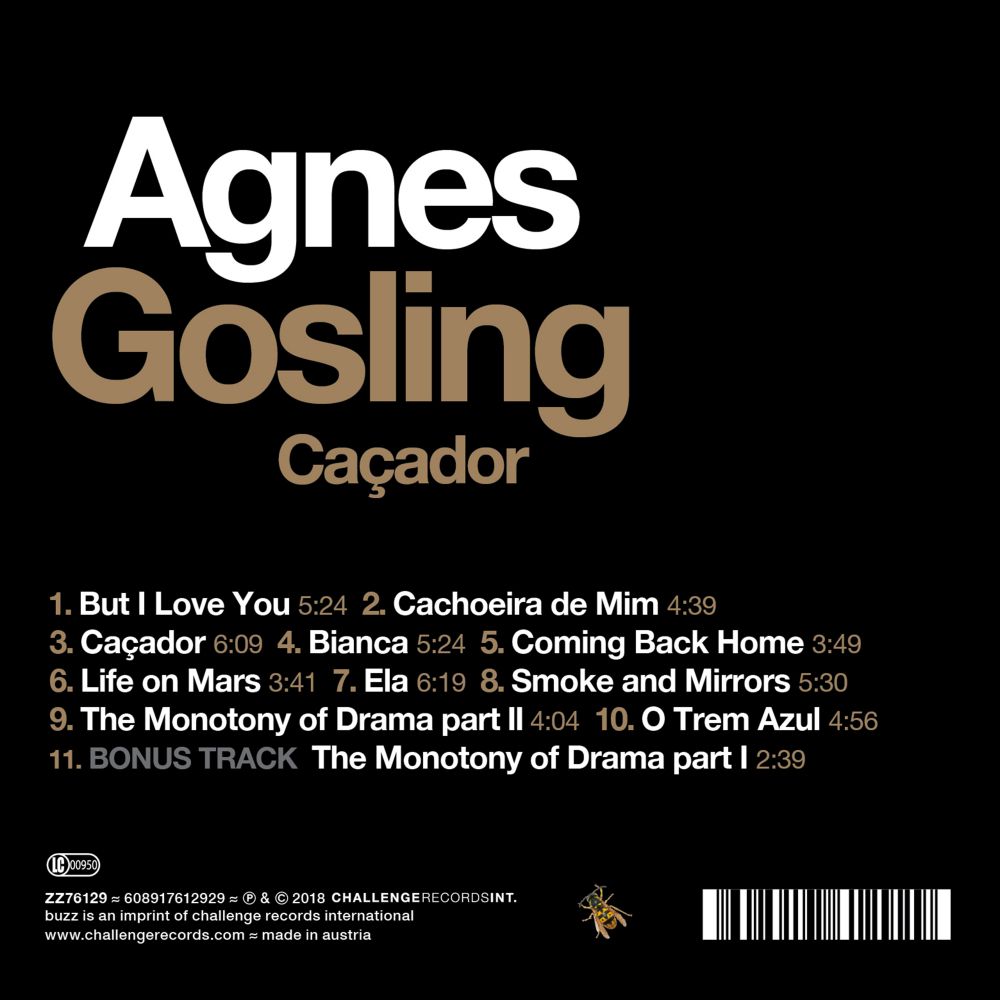 Caçador is the new album by singer Agnes Gosling, who made her debut with Cais, an Edison-nominated CD dedicated to the Brazilian songs of Milton Nascimento and Elis Regina. On Caçador, Gosling explores new avenues. The album is made up from a mixture of Brazilian popular music, jazz, pop and electronic music and contains almost exclusively original compositions full of suspense, harmonically braver and more mysterious.

In close collaboration with studio magician Vincent Helbers and the renowned drummer Richard Spaven, these arrangements rouse emotions with an acute expression of the enchantment, rapture and despair of love. As in real life, there is light and shadow. Gosling has matured as a composer and arranger and is not afraid to show her vulnerability. The track “Aber ich liebe dich” (But I love you) shows deep feeling, something we all experience, but only few can immediately express that way. Elsewhere she and her band refine standards like “Bianca” (Egberto Gismonti) and “Trem Azul” (Lô Borges), the latter with Richard Spaven’s inimitable drumming and Vincent Helbers on synths modulating Bob James. Finest and demanding guitar, harmony singing, hard rhythms, orchestral passages – this album has it all. Expect a fascinating mix of contrasts, a Portisheadesque bridge between the acoustic and the electronic spheres.

A voice is rarely the first ‘instrument’ that comes to mind. But in the right hands, and through steady application, a voice becomes the ultimate expression through sound. It not only breathes life into a song, it can create something familiar yet unusual and intimate.

This is Agnes Gosling’s approach to music and, as time passes, she continues to reveal different colours and textures in her vocals, reflecting key experiences and the emotions they trigger. Often poised and pristine, occasionally more fragile and unpolished, melody and harmony are how she speaks her truth.

Turned on to Seventies' fusion by her parents' record collection, Gosling enrolled at the Rotterdam Conservatory, excelled in the Brazilian Jazz department and was soon travelling the world as a performer. One of the places that quickly became a key musical touchpoint was, not surprisingly, Brazil. "I love how music is alive everywhere you go, how passionate and positive the people are," she says.

It’s been four years since the release of her Edison Award-nominated debut Cais, a refined collection inspired by the likes of Milton Nascimento and Elis Regina. Her second album is harmonically bolder, more mysterious and laced with tension. Caçador honours the tradition of great acoustic jazz while exploring new sounds and styles from the contemporary music world.

Soon after Cais, Gosling started humming and “sketching” ideas to send to her producer and musical director, Vincent Helbers (Flowriders, Seravince). They would also go back and forth with playlists of tracks by artists such as Bjork, Emily King, James Blake, Portishead and Nana Caymmi.

Helbers is not only a studio wizard, he is the guide that has supported and challenged Gosling to deliver the most daring expression of her vision. Someone who’s not afraid to do a “complete 180” as Gosling puts it. Take ‘Monotony of Drama (part II)’, for example, which was stripped down to a fractured beatscape and ghostly melody to evoke the confusion Gosling was writing about. (“Paint my house in bright white/Paint my nails in blacklight.”)

Many arrangements will stir listeners with their acute expression of enchantment, rapture and melancholy. There’s ‘Cachoeira de Mim’, which went through several drafts and whose circular calm masks the trouble within. It represents the struggle to stay focused when things get on top of you. As in life, there is light but also shade. Gosling is really maturing as a writer and arranger, unafraid to show her vulnerability.

Her inspiration often comes from everyday frustrations and anxieties.
‘Coming Back Home paints a picture many couples will be familiar with. (“Coming back home you're upset/Get hung up on things I never said/And I won't talk at all.”) Gosling explains, “It’s about the daily back and forth in a relationship and how, in the end, it’s all part of the game … and all good.”

Although tracks like the opener ‘But I Love You’ are intricate and layered, they came together quite quickly. The composition swells from a twinkling amorous reverie to a quickening pulse of marching drums and wailing guitar as Gosling sings about being torn between loves past and present.

The band gets a special mention here, particularly the nucleus of Helbers on keyboards, Richard Spaven (Jose James, Cinematic Orchestra) on drums and Robin Mullarkey (Eska, Jessie Ware) on bass. “They just blew my mind,” says Gosling. “Everybody seemed to instinctively know what that song needed. They each have a distinctive sound, yet they can all fold around and fit into mine that works so well”.

“Richard is in a league of his own. Playing with him is like flying. I have never met or played with someone like Rob, he is the glue you wish for in a bass player. But at the same time he can suggest a direction in the way he plays that just lifts everything up. And without Vincent, there simply wouldn’t be an album. His vision and knowledge on sound, colours and instrumentation are so advanced and original.”

Arguably the finest moment for this unit is ‘Ela’, an Egberto Gismonti-inspired track that they nicknamed “the beast with seven heads” on account of its complex and unconventional nature. It’s a suite that moves back and forth between rhythmic waltz and Tropicalia-like string passages. Gosling takes the role of a spurned lover, singing to her ex about the predatory other woman, asking, “Who am I to deny the love of your inexperienced dreams?”

Caçador also includes three reconfigured standards. There’s Gismonti’s ‘Bianca’, arranged and produced by Spaven, whose patter adds backbone to a dreamy composition. Bowie’s ‘Life on Mars’ is given an acoustic treatment reminiscent of Seu Jorge’s rendition. But this version taps into the alienation at the heart of the lyrics thanks to Helbers’ desolate synth chords.

And let’s not forget the sublime ‘Trem Azul’ by Lô Borges, which is tastefully transformed from gentle sway to fizzing fusion (featuring Lars Dietrich on saxophone and Helbers channeling Bob James).

Songs you can relate to, first-class musicianship, a few unexpected moments… It’s all here. And at the heart of it is Agnes Gosling, She sings what many of us feel yet few can express. It’s jazz, but not as we know it.

“What a singer. I don’t understand anything [because Brazilian] but I believe everything” – Mijke Loeven

“Every now and then a Dutch singer comes along, someone who really can bring a Brazilian song to life. That’s Agnes Gosling” – Jazzflits

Caçador van Gosling is an album of international class that has an extra quality injection through a glowing cover version of Bowie's Life On Mars.
Heaven, 30-5-2018

Integer music for people today with a cover version of Bowies Life On Mars and some exciting own compositions.
Mania, 04-5-2018

An enchanting album that also has enormous audiophile qualities. Belongs to the top productions of this month.
Music Emotion, 04-5-2018

The Rotterdam singer Agnes Gosling wrote the pieces for her new album together with her fellow musicians.
Nederlands Dagblad, 13-4-2018

Pleasant, worldly and modern listening music with a deeper character that becomes noticeable when you listen to it carefully, that is Caçador in a proverbial nutshell.
Music Emotion, 30-3-2018