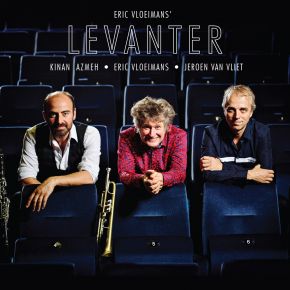 This trio will take you along on a musical adventure, flying on a magic carpet of sound, a journey accross the borders of jazz, classical and world music.  op on and be transported on the warm billows of Levanter.

Eric Vloeimans (composer)More information
26-04-2019 Jazzism
"Nominated for Edison 2019."
01-05-2018 Heaven
"As the warm wind of the Levanter arriving from the east in Southern Europe makes the air sizzle, do the sounds of the trumpet of Eric Vloeimans come to us."
20-04-2018 Muze - Pianowereld
"A compelling and masterful album with jazz and world music."
30-03-2018 Music Emotion
"With Levanter there is an album that shows a number of moody, mysterious and expectant tracks. They are a voyage of discovery through the home sound of the band members."
19-03-2018 JazzFlits
"With 'Levanter' Eric Vloeimans shows us once again that music only has to do with emotion. Magnificent!"
19-03-2018 JazzFlits
"Eric Vloeimans is a gifted trumpet player who rolls from one adventure to another, as long as people with feelings join him. At Hothouse Redbad he played together with the Syrian clarinet player Kinan Azmeh & Jeroen van Vliet."
09-03-2018 Mania
"... a multi-colored sound that captivates more than an hour."
26-02-2018 Trouw
"Levanter is one of Vloeimans' most impressive projects. In the first place because, he has to give everything next to virtuoso Azmeh. Secondly, because the band is very well balanced."
19-02-2018 Rootstime
"Again a top CD by Eric Vloeimans cum suis, this is going to score very high in my end-of-year list! If the trio is in your neighborhood, go there for sure; Eric's explanatory notes for the songs are enlightening."
02-02-2018 De Volkskrant
"This acoustic trio seeks the beauty in quiet, broadly stretched pieces, in which all three musicians take the space to profile themselves."
30-01-2018 Jazzenzo
"Levanter is yet another highlight from the work of Eric Vloeimans. In whatever genre you place the musician, from baroque to trance and from jazz to marines chapel, the Meryl Streep of Dutch music gets the prizes at the end. Impressive artistry, which guarantees full houses."
30-01-2018 jazznu
"What a party, Levanter with Vloeimans, Van Vliet en Azmeh"