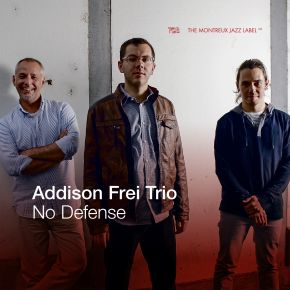 Frei also co-leads AMP Trio, contributing compositions to Three (2017), m(y)our world (2015), which rose to #24 on the Jazz Week charts, and Flow (2013). AMP Trio recently completed a Japanese tour and alongside vocalist Tahira Clayton, was selected as the winner of the DC Jazz Prix, earning a DC Jazz Festival performance in 2018. With his 2016 single and music video “Postcard”, Frei again teamed up with Clayton, this time expanding into a broader production palette. Following in this sonic path, he explored political themes in a digital EP, Future Speak (2017).

Frei currently holds the piano chair in the Juilliard Artist Diploma Ensemble, regularly performing and touring with the conservatory’s flagship jazz ensemble. In New York he has held residencies at the Kitano and the Cell Theatre. Frei performed a concert series at the 2017 Lucerne Piano Festival. He was also a featured soloist with Drew Zaremba’s Unity Orchestra in Dallas. Frei headlined the 2015 Wichita Jazz Festival and brought his group to the Dallas Museum of Art. He has toured alongside vibraphonist Christian Tamburr, Felix Peikli and Joe Doubleday’s “Showtime Band”, and the Charles Turner Quartet. His acclaimed compositions have earned him invitations to Betty Carter’s Jazz Ahead and Ravinia’s Steans Music Institute. Frei is a two-time recipient of the Herb Alpert Young Jazz Composers Award sponsored by ASCAP. He served as musical director of B-Side Productions’ Adding Machine and The Wild Party.

“Throughout this set, Addison Frei’s playing and compositions are so sophisticated and mature that one would never guess that this was his first recording. Seven of the first eight songs are his originals. Those are not merely quick melodies and chord changes that serve as the foundation for long solos. Instead, the songs often travel through several moods and the development is both unpredictable and logical. The emphasis is on thoughtful playing, close group interplay, concise and meaningful statements, and a lyrical ballad feel even during the more heated sections.”
— Scott Yanow, jazz critic/author