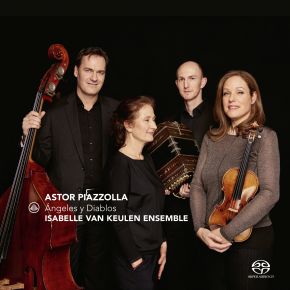 The angel as a symbol of the tango-dance, death and resurrection

Without losing the romance, the violence, eroticism and devotion of the traditional tango that he saw as empty and hollowed out, Piazzolla renewed and modified it with elements of European art music, Argentine folklore and jazz, and thus tango took on a new meaning and shape.

The writer Alberto Rodriguez Muñoz approached Piazzolla in 1961 with a request to write music for his play Tango del ángel, which is about an angel appearing in an apartment block in Buenos Aires to cleanse the souls of its inhabitants. The titles Introducción al ángel, Milonga del ángel, and Muerte del ángel were created. The latter, a four-part fugue with hard, uncompromising harmonies and rhythms, impressively shows how far Piazzolla pushed the boundaries of traditional tango.

When the play was performed in 1962, even the previously hostile parts of the musical public in Argentina had to admit how fitting and successful this music was and the titles, especially Milonga del ángel, gained extraordinary popularity.

The motives of angel, Ángel, and devil, Diablo, appear in many of the tangos composed by Astor Piazzolla: "In my story, angels and devils mix - you have to have something in everything."

For a concert with his quintet at the Philharmonic Hall in New York in 1965, he wrote the series of Diablo titles: the spooky Tango del diablo, the intimate Romance del diablo and the wild, lashing Vayamos al diablo.

The second part of the Isabelle van Keulen Tango-tour in the Netherlands will start on January 20th and go from Zwolle, Eindhoven, Ede, Heemstede,  Oostzaan to Delft. Lots of opportunities to see them play! See the video of 'Tango!' here!

Thank you for the compliments!

Rüdiger Ludwig (featured)More information
01-08-2018 Gramophone
"The van Keulen Ensemble have set the bar so high, and so much of what's here is compelling and freshly thought."
21-06-2018 Opus Klassiek
"One hears the unprecedented devotion of the musicians and the recording is excellent, but it is as if the tango has not been enriched but halved."
08-06-2018 Concerti
"ISABELLE VAN KEULEN plays violin like viola. Above all, however, the sports enthusiast from the Netherlands sets her colors in music - only she does not like green."
25-05-2018 Kerk & Leven
"Angeles y Diablos is a very strong interpretation of an important theme from the work of tango master Piazzolla."
24-05-2018 Elsevier
"The ensemble shines an enlightening light on Piazzolla's mythical dimensions."
07-05-2018 Classic FM
"Album of Week Isabelle van Keulen - Ángeles y Diablos... beautiful tango cd."
04-05-2018 Mania
"A sparkling tribute to the grandmaster of the tango."
05-04-2018 AVROTROS
"'Ángeles y Diablos', or Angels and Devils, is a tribute to tango master Astor Piazzolla. Star violinist Isabelle van Keulen brings her ensemble together and steps into a roller coaster of emotions."
28-03-2018 Stretto
"This is a great CD. The Isabelle van Keulen ensemble brings these renewed, infectious tango's with a lot of dedication and passion."