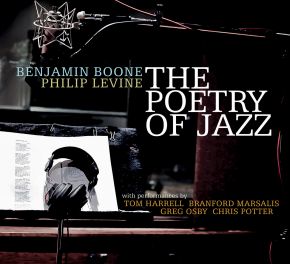 The Poetry of Jazz

Without knowing or planning it, saxophonist/composer Benjamin Boone has spent his life preparing for a collaboration with Philip Levine. Long fascinated by the inherent musicality of the spoken word, Boone crossed paths with the Pulitzer Prize-winning poet as fellow professors at California State University, Fresno, and they ended up working closely together in the three years before Levine’s death in 2015. Boone and Levine’s "The Poetry of Jazz" captures a genre-expanding partnership unlike anything else in the jazz canon. Produced by piano great Donald Brown, the 14-track project features the compositions of Boone, the poetry of Levine, and a stellar band with special guest appearances by Tom Harrell, Greg Osby, Branford Marsalis and Chris Potter.