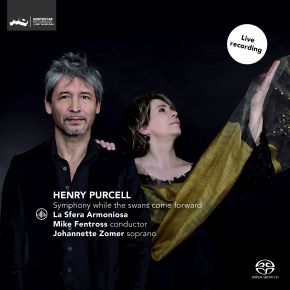 La Sfera Armoniosa, founded in 1992, is a Dutch Baroque ensemble and orchestra specialized in the performance of music from the seventeenth and eighteenth century. Artistic director and conductor is Mike Fentross. Mike Fentross: I was really moved when I heard my orchestra play the opening bars of the Purcell. I heard a sound that was quite different to what I knew from other present-day baroque orchestras. Was this sound closer to that of Purcell's own orchestra, a sound that he may have had in mind when composing this wondrous music? In the very first chat I had about this project with Lidewij van der Voort, our new concertmaster, we talked about the modern adaptations that are often (and understandably) applied to baroque instruments nowadays, and about the possibility of going back to authentic strings (completely bare gut) and a 17th century bow hold (the French grip) for this Purcell project. As it happens, I'd had a similar conversation not long before that with Lidewei de Sterck, our principal oboist, about authentic reeds (scraped from the inside) and with Graham Nicholson, about 17th century trumpets (natural trumpets with no finger holes). These aspects, seemingly just details, have a major impact not just on the sound but also the way of playing and therefore on the way we interpret the music. We all felt the need to record this CD with these 'experimental' instruments. An orchestral sound with so much transparency and colour, a way of playing with such narrative power! I'm full of admiration for the musicians who played so beautifully and who were prepared to take up the challenge of moving away from a well-trodden path.

Johannette Zomer (soloist)More information
26-04-2019 TOCCATA
"Lively and theatrical, in Purcell's sense."
12-09-2018 Opus Klassiek
"The enthusiasm with which Johannette Zomer, Mike Fentross and his orchestra know how to transmit this music results in a surprising applause."
28-08-2018 WDR3
"Ayres for the theatre" by Henry Purcell was performed live in Essen by the Dutch ensemble La Sfera Armoniosa in 2017. The recording of the concert has now been released on CD. Jan Ritterstaedt has heard the CD….The result is not a polished recording with the ambition of perfection, but rather an extremely lively, spirited and passionately live concert experience."
05-08-2018 De Gelderlander
"An important reason for not passing this baroque album is the vocal contributions of Johannette Zomer. This melancholic music with its long lines in combination with works full of vocal fireworks is like a cast."
20-07-2018 Luister
"A CD with entertaining, mostly short pieces from so-called 'dramatic operas' - the leading musical drama genre in England of those days - by Henry Purcell."
25-05-2018 HRAudio
"We have here a clever summary, drawn from Purcell’s end of life creative skill. What else is left to wish for?"
24-05-2018 NRC Handelsblad
"The fact that this is a concert recording contributes to the vital character of the performance. Not the technical - but often clinical - perfection leads the dance, but the emotions that the composer wanted to evoke with sounds. Purcell seems to have been brought back to life by La Sfera Armoniosa ."
23-05-2018 Stretto
"Purcel's Aria by an expressive Johannette Zomer and the beautiful ensemble, "La Sfera Armoniosa", directed by Mike Fentross on Channel Classics. A new sound."