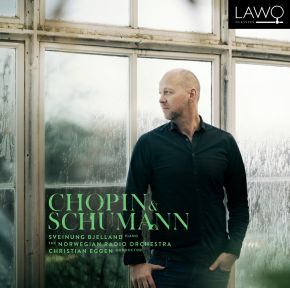 CHOPIN & SCHUMANN
Chopin’s E minor Concerto and Schumann’s Opus 92 remain as two of the finest of all works for piano and orchestra by composers from the early part of the Romantic era — the universal spirit of these compositions being equally relevant in the early decades of the 21st century as they were when they first appeared.

Sveinung is one of The Norwegian Radio Orchestra’s preferred partners, both as soloist, which he has been numerous times, and in its chamber music series. With an ear for detail in sound and phrasing and content only after achieving his intended nuances at the micro level, he is, at the same time, a pianist with the power and authority needed to be heard over the orchestra. In these works, the interplay between soloist and orchestra is especially important, and it may be noted that the conductor on this recording is also a pianist.


The award-winning pianist Sveinung Bjelland from Stavanger is Professor at the Norwegian Academy of Music and the University of Agder. Bjelland can look back on an extensive career as soloist, both on international concert stages and on numerous recordings. His previous release on the LAWO Classics label, “Rachmaninoff/ Shostakovich: Cello Sonatas” (LWC1131) with cellist Audun Sandvik, received glowing reviews in Norway and abroad.

The Norwegian Radio Orchestra is known and cherished throughout the land and regarded by music-loving Norwegians with a unique combination of respect and affection. The orchestra is comprised of highly talented classical instrumentalists and its musical philosophy is distinguished by a light-hearted approach, a curiosity for all kinds of music, and an unwillingness to pigeonhole musical styles.

Conductor, composer and pianist Christian Eggen is one of the most influential figures on the Norwegian music scene. His field of expertise ranges from contemporary music via genre-merging projects, installations, television and radio drama productions to film, theatre, jazz, opera and classical music.

Robert Schumann (composer)More information
Christian Eggen (conductor)More information
The Norwegian Radio Orchestra (orchestra)More information
11-04-2019 Pianonews
"...The E minor concerto recorded here, which carries the No. 1 but is in fact his second concerto for piano and orchestra, embodies Chopin's early mastery. The pianist Sveinung Bjelland proves brilliantly to be an excellent Chopin interpreter through his handling of the graceful ornamentation of the style. The transparency of the figurations, the singability of the bel canto bows in the slow movement, his soulful agogics and, last but not least, his sovereign virtuosity - all these are qualities with which Bjelland captivates the listener. He succeeds in a unique way in sharing his affinity for Chopin with the audience. The Norwegian Radio Orchestra under the baton of Christian Eggen also contributes to the high quality of the recording..."