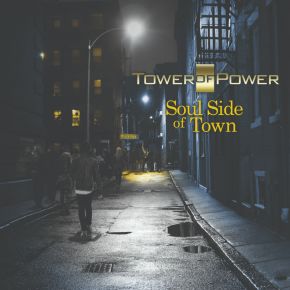 Soul Side of Town

TOWER OF POWER – the most dynamic and distinctive band of survivors in Soul Music – is roaring into its unprecedented 50th anniversary with a dynamic new disc of all new material. A labor of love, definitively titled Soul Side of Town, this package is charged with 14 filler-free songs. As always, the songs on Tower of Power’s Soul Side of Town were primarily composed by the hit-making team of founding members Emilio Castillo and Stephen “Doc” Kupka who also hold down the world famous 5-man Tower of Power Horns. For the special occasion of Tower of Power’s 50th anniversary, leader Emilio Castillo brought in a most-astute choice in co-producer, Joe Vannelli in addition to mastering engineer Bernie Grundman. Along with the legendary rhythm section drums and bass lock of David Garibaldi and Francis Rocco Prestia, respectively, TOP consists of guitarist Jerry Cortez, Hammond B3 organist/keyboardist Roger Smith, 1st tenor saxophonist Tom Politzer, and trumpeters Adolfo Acosta and Sal Cracchiolo. Soul Side of Town is also blessed with not one but two lead singers: outgoing Ray Greene and incoming Marcus Scott (boldly introduced on several selections, including “Hangin’ With My Baby”). The 10-piece Tower of Power band is prepared to throw down with a celebratory tour that will include sweet spots around the globe.

Tower of Power (artist)More information
Tower of Power (composer)More information
17-08-2018 Jazzism
"They bring their familiar mix of up-tempo funkers, real mid-tempo songs and a single soulful ballad, much better then on some of their earlier albums from this millennium."
02-08-2018 Rootstime
"This is funky soul at its best, real dance music, both jiven and grinding. Fully recommended."
20-06-2018 Blues Magazine
"Highlights include the long title, the nice softsoul ballads Let It Go and Love Must Be Patient And Kind, the fun funky Stop, Can not Stop Thinking About You and the early Toto remembering When Love Takes Control. Highly recommended!"
03-06-2018 Jazzenzo
"Full of powerful tight syncopated blues, in-sync bass and drum rhythms with those typical 16th bass notes by Rocco Prestia."