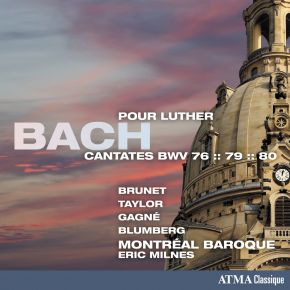 Scandalized by the abuses of the Catholic clergy, on October 31 1517, the Augustinian monk Martin Luther posted his Ninety-Five Theses on the door of All Saints’ Church in Wittenberg. The document condemned the selling of indulgences, advocated radical reforms, and set out his doctrine of justification by faith alone.

Every October 31 since the early 16th century, Lutheran communities have celebrated the Feast of the Reformation. In his role as cantor at the Saint Thomas church in Leipzig, Bach wrote two cantatas to be sung for the occasion: the first version of BWV 80, likely composed in 1723, and two years later BWV 79. Cantata BWV 76 was written for the second Sunday after Trinity, and the second part was offered to the church of Saint Paul for its Reformation celebrations in 1724, 1729, 1740, and 1745.