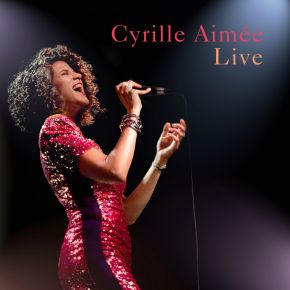 As anyone who has followed her work over the last decade can hear, Aimée thrives on living in the moment. Nowhere is that more evident than on stage; throughout Cyrille Aimée Live she holds the audience in the palm of her hand. Rapt during quiet moments, raucous as the spirited band swings into high gear, roaring with laughter at Aimée’s charming and quirky banter, or singing along with a Michael Jackson medley, the crowd is an essential part of the buoyant show. The album finds the acclaimed vocalist bidding a fond adieu to her long-standing band and looking forward to a brand-new phase in her life and career. The August performance marked the band’s final show together, saying goodbye to this configuration of Aimée’s band while welcoming a new chapter of creative output. The concert captured here marks the end of an era, but the tone is celebratory, not bittersweet.