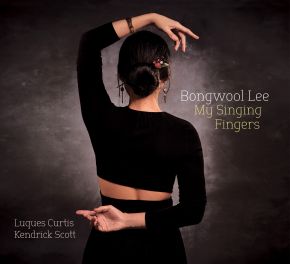 From Seoul, Korea, New York-based jazz pianist and composer Bongwool Lee was exposed to music from an early age and was quickly considered a musical prodigy, winning Korea’s acclaimed Samik Competition at 7. Her focus later shifted from Classical to the world of Jazz upon hearing Oscar Peterson on the radio. Earning her Master's at the Manhattan School of Music in 2012, Bongwool has since found herself at the forefront of NYC’s Jazz scene. Her debut recording's title, "My Singing Fingers," represents Lee's releasing of her lifetime study of advanced music theory, allowing the melodies and harmonies to flow directly from her head and heart through her fingers. With her newfound musical friends - bassist Luques Curtis and drummer Kendrick Scott - Bongwool offers nine very personal compositions in a rich sonic package that heralds a bright musical future.

Kendrick Scott (featured)More information
31-07-2018 Rootstime
"Bongwool Lee's phenomenal technique gives her every opportunity to fully exploit her musical ideas and with that she is a great plus in the world of jazz."