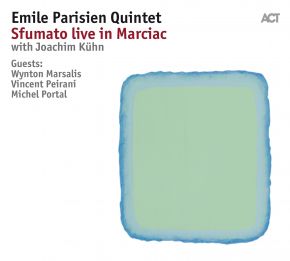 Emile Parisien attended jazz classes at the Collège de Marciac (middle school) as a teenager. Marciac is a small village in the South West of France, which has been home to one of the leading jazz festivals in the world for the past 40 years. This was how Emile was able to participate in several master classes given by Wynton Marsalis, who is a Patron both of the Collège and of the Festival.

In spring 2017 Jazz in Marciac offered Emile a post as Artist in Residence, giving him carte blanche. After having given the matter a lot of thought, Emile Parisien assembled a cast like a stage director would do it, and to say the very least it had some surprises in it: he wanted an “intergenerational” group, a reflection of wanting to obey sudden impulses, plus the desire to bring about encounters in many forms...

Encounters are definitely something Emile loves... There’s a septuagenarian, pianist Joachim Kühn, a major name in “open” jazz. Manu Codjia, a guitarist in his 40’s, an incredible sound explorer involved in numerous projects on the European scene.

And then there are three in their thirties: Emile himself, of course (he is some of the best news to hit European jazz in a long time), plus Simon Tailleu and Mario Costa.

This last pair are still little known in the jazz world; they were spotted by Emile during concerts and festivals. It was a gamble to hire two young musicians to give rhythmic underpinning to the top drawer soloists, but it was a gamble which paid off.

After four days of intense and convivial rehearsals during Marciac’s spring residency, Sfumato’s first concert was a complete success.

There proved to be an astonishingly fruitful chemistry and synergy among the cast members Emile had put together. His intuition had been right. Since then, the Sfumato project has been recorded (the CD has had praise heaped on it). The group has given a huge number of concerts which have been greeted with enthusiasm by critics and by the public everywhere.

In August 2017 Sfumato were booked to play at Marciac, where fans of Sfumato were given a huge surprise: during the concert Wynton Marsalis joined the band on the stage of the festival tent. The audience of 5,000 were stunned!

Wynton was visibly extremely happy to be back with Emile (whom he had nurtured as a middle school student) and improvised superbly and warmly on two tunes: Sidney Bechet's “Temptation Rag”, played not without an element of didacticism, and then a wacky version of Joachim Kühn’s “Transmitting”. The whole history of jazz in 15 minutes: New Orleans to free jazz. It was quite an eye-opener – as the DVD will prove.