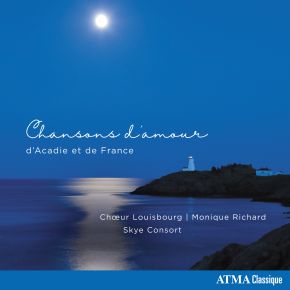 Love Songs from Acadia and France

New Brunswick’s Louisbourg Choir presents an original and exceptional recording of Acadian folksongs about love. The program is drawn from the collections Chansons folkloriques d’Acadie-La fleur du rosier and Chansons d’Acadie Collection, with a cappella motets by Jacotin Le Bel (c.1495 - c.1556). This French Renaissance composer drew ideas and inspiration from popular tunes and folksongs of his era.

Founded in 2006, the Louisbourg Choir, under the direction of Monique Richard, has quickly become established in New Brunswick’s cultural landscape. While the Louisbourg Choir has distinguished itself by specializing in early music, it also occasionally embraces other musical periods. The choir has worked with renowned conductors such as the late Christopher Jackson, Alexander Weimann, Denis Gautheyrie, and more recently, Andrew McAnerney.