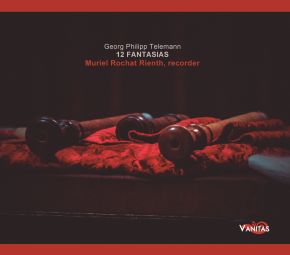 Telemann was a musician and composer who lived and worked in Leipzig, Sorau, Eisenach, Frankfurt/Main, and Hamburg. He is considered the most important German composer of the late baroque era, and an extraordinarily productive musician with an oeuvre of over 3,600 works which cover all genres, including opera. He was one of the few artists of his era who was well respected during his lifetime, and he was able to live comfortably from his work as a musician. He was entirely self-taught, playing a variety of instruments, including the recorder, the violin, and the harpsichord. He was also a great proponent of the recorder, which is why he (along with Händel) is often described as the greatest recorder composer. His work for the 'flauto dolce' includes solo concerts, suites, sonatas, trio sonatas, as well as extended recorder parts in oratorios, passions, and cantatas. Of special significance are the "12 Fantasias for Solo Flute", published in Hamburg in 1.733, which,  along with the "36 Fantasias for Harpsichord", the "12 Fantasias for Solo Violin" (1.753), and the "12 Fantasias for Viola da Gamba" (1.735), complement Telemann's oeuvre for solo instruments without bass accompaniment.

The "12 Fantasias" recorded on this CD are based on a transposition for treble recorder (raised by a third) which is stored in the library of the Conservatoire Royal de Musique in Brussels. In the 18th century it was quite common for recorder players to perform their own versions of well-known works. Telemann's "Fantasias" quickly gained in popularity. Johann Joachim Quantz, Frederick the Great's recorder teacher, recommended them as a "prime example of virtuosic flute music".

Georg Philipp Telemann (composer)More information
Muriel Rochat Rienth (soloist)More information
05-08-2018 Music Frames
"After all, on a recorder it is impossible to play more than one tone (chord) at the same time. This creates a sort of musical ‘watermark’ that the performing musician needs to understand in order to be able to perform these skillfully in order to convey the musical message correctly. And that is exactly what Muriel Rochat Rienth does, virtuoso and very well played and that is enjoyment!"