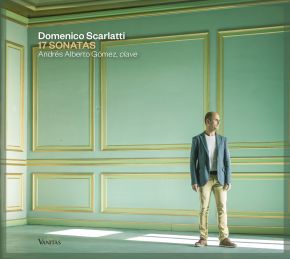 The activity in the house of the very young Domenico had to be full of a frenetic musical activity. The commitments of his father, the great Alessandro Scarlatti, decided the daily rhythm of the home; librettists were received, rehearsals were organized, scores were corrected, instruments were tuned.

In spite of the tremendous relevance that the Neapolitan conservatories had for their very complete musical training, there is no evidence that Domenico was attached to any of them, his family and especially his father took up part of his time in the young man's musical education. Alessandro always cared for the education of his children, and especially for Domenico's. The tremendous fame of the father eclipsed the growing talent of the son, for that reason Alessandro decided to involve Domenico in all those moments that would somehow serve to build the future composer: Florence, Venice, Rome, ... Vivaldi, Gasparini, Corelli, Pasquini , ... Ottoboni, The Academies, ... all those ingredients offered on a platter by the father distilled the taste and training of a musician who, when he was 34 years old, decided to abandon a magnificent post at the Vatican (for which many others had sold his soul) to go beyond the seas in the uncertainty of a future far from Italy.

During his life, Domenico Scarlatti always stood in the background, in the shadow of events, without the slightest desire protagonist. Creator of fifteen operas, dozens of arias, duets, cantatas, oratorios and several religious works, his 555 harpsichord sonatas support to date the full weight of his fame as a composer. Burney leaves us this revealing testimony: "a grave young man dressed in black and in a black wig, who had stood in one corner of the room, very attentive" It seems that Scarlatti was a very introverted character, with a volcano inside him that react when he sits at the harpsichord.

Everything, absolutely everything is thought from the perspective of a musician who dedicated his life to playing the harpsichord, as noted by Burney "disinterested by the common occupations and very addicted to play", a HARPSICHORDIST with capital letters, a "maestro del cembalo" a perfectionist of the touch, passionate by the harpsichord sonority, a talent only comparable to John Bull, William Byrd or Francois Couperin, in the words of Genoveva Gálvez "glory of the Mediterranean". In his sonatas you can hear the echoes of L'Armonico Pratico al Cimbalo by Gasparini, the melodic prose of Corelli, the tradition of the Neapolitan Partimenti, the joy of the Seville streets, the indolence of the Madrid palaces, the humble, the pretentious, the outdated and the eternal.