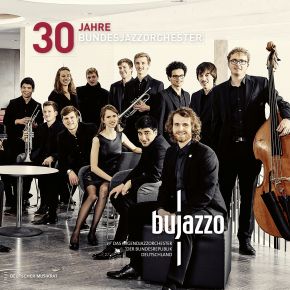 The German Federal Jazz Orchestra (BuJazzO) is celebrating its 30th anniversary in 2018. Excellent variety and eternal youth distinguish the German Federal Jazz Orchestra. The young BuJazzO members spend two intensive years in the ensemble among kindred spirits. They come in contact with the best teachers and the most exciting programs in a professional environment in the most interesting places. Those who leave BuJazzO have learned a lot musically, but also things that are important for the professional life of musicians. No member may be older than 24; others take their place in BuJazzO after that. The more than 900 former members influence today's professional music life at key places around the world.

The anniversary CD “BUJAZZO 30" presents a cross-section of the work of the last five years. The musical variety of the orchestra moves between tradition and modernity as well as through various styles of jazz. Examples include "La Suerte De Los Tontos" by Johnny Richards, 2016, under the direction of Jiggs Whigham, together with the National Youth Jazz Orchestra (England) and the Nationaal Jeugd Jazz Orkest (Netherlands). Ansgar Striepens brought the song "Le Cyclo Pathe" by Pierre Bertrand from Paris in 2017 into the working phase with the WDR Big Band. Kurt Elling already sang his "Steppin' Out" for the 25th Anniversary, Jörg Achim Keller brought the German Federal Jazz Orchestra together with Nils Landgren in 2016/2017, and Mike Herting did the same with Wolfgang Niedecken in 2017/2018.

The BuJazzO often welcomes guest conductors and soloists, who also enrich the offer for the audience sustainably, for example, John Hollenbeck 2015 ("11"). A few composition competitions also regularly supplement the offer for young composers ("The Whole Truth" by Mike Conrad, 2015). The long-standing partnership with Westdeutschen Rundfunk (West German Radio – WDR) is attested to by the two arrangements "Inner Urge" and "A Sleepin' Bee" from the archives of the Kurt Edelhagen Orchestra.

Two large special projects have kept the ensemble extremely busy over the last two years. On the one hand, the 500th Reformation Anniversary in 2017 under the direction of Michael Villmow, and on the other hand the "100 Years of Bauhaus” anniversary under the direction of Niels Klein in the 2018/2019 season. The German Federal Jazz Orchestra positioned itself for both important events as a cultural ambassador of Germany with outstanding new compositions for jazz orchestra with vocal ensemble. On this CD, you can hear Martin Luther's chorale "Verley uns Frieden" in the new version by Michael Villmow as well as the piece "Das Geheimnis der Marquise” (The Secret of the Marquise) by Ansgar Striepens about the silhouette film by Lotte Reiniger (1920) of the same name from the archives of the George Eastman Museum Rochester (USA).