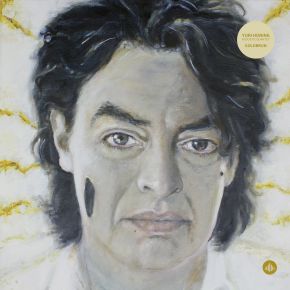 The album’s central motives are Europe and heroism. In times in which people don’t always appreciate the value of Europe – 70 years of peace – Honing tells a compelling story. In order to explore Europe’s history, he chose Germany as a symbol for Europe with regards to writers, philosophers, composers and painters, a decision also partly based on the country’s resilience and its leading role in present-day Europe. He demands more pride about Europeans and the cultural DNA of our continent.

Honing was particularly inspired by the beauty of the music of Richard Wagner (1813-1883) and his student Richard Strauss (1864-1949). Both were defining in their music, albeit against the tastes of the times. Track 4, “Goldbrun IV”, processes these strands of inspiration.

The album title, Goldbrun, is a neologism. For Honing, it describes the way of composition of the album. The (harmonic) themes are weaved into a greater entity, characterised by the intervals of the central theme being minor seconds.

He plays the 1961 album Lush Life’s “Like Someone in Love” without piano, allowing the listener a continuous overview.
Honing: “When I compose, I start with a core and from there I work my way to the fringes, just like harmonic structures that begin in the middle and spread out. Is a spherical affair, Goldbrun.”

All influences and collaborations around this project have created a complete work of art. In a second phase, the exhibition Goldbrun opens on 22 September 2018. It is a cooperation of artists Mariecke van der Linden and Yuri Honing in the Museum de Fundatie in Zwolle (NL), in a special room for installations, music and oil paintings.

Wolfert Brederode (featured)More information
05-10-2018 Eindhovens Dagblad
"Goldbrun, released on CD last year, is an atmospheric album with music in which every note has a charge. Now there is also a version on vinyl. Honing is very satisfied with it. "Pressed on marbled, 180 grams vinyl", he smiles."