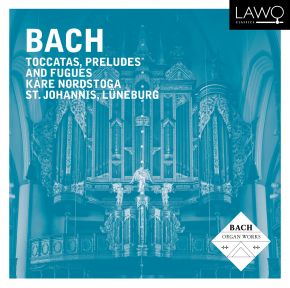 NORDSTOGA’S NINTH
In his ninth and tenth of a total of fourteen releases of Bach’s collected organ works, Kåre Nordstoga pulls together much of what was not collected from the composer’s side — preludes and fugues.

The double form prelude (or toccata) and fugue has been an established form of composition since the 1600s. The North Germans Dietrich Buxtehude and Georg Böhm made a powerful contribution to this contrastive style in which the freer first part and the more rigorous second part are united in a dynamic whole. The young Johann Sebastian harvested significant impressions from these two composers during his time in Lübeck and Lüneburg, and this album was recorded in Lüneburg.

Kåre Nordstoga (b. 1954) studied at the Norwegian Academy of Music under Søren Gangfløt, Bjørn Boysen and Kaare Ørnung, among others. Following his debut concert in 1978, he continued his studies under David Sanger in London, and he was for a time organist at Ullern Church, before coming to Oslo Cathedral in 1984. He has also been associated with the Norwegian Academy of Music, where he was appointed professor in 1994. Nordstoga is an active concert organist.

Kare Nordstoga album LWC 1153: Just listened to a few tracks via you web site sampling facility, and so far it sounds like a great recording. I have a few Bach organ cycles on record, but they all come from the 1980's and 1990's with sound quality not comparable to the high sound quality you get with 2018 technology (depth, clarity, air etc.) Since I have installed high quality audio equipment, I need good replacement recordings with good quality sonics. But I found it quite difficult to find good, solid Bach interpreters on recent recording cycles. Many newer organists put their own stamp on their playing, especially by pulling tempi around. Bach reaches me best when the music is allowed to unfold unrushed and without tempo quirks. And, by my first hearing, this seems to be what Kare Nordstage has done in this album. I'm quite excited - maybe his cycle is what I am after - now need to investigate all his Bach recordings to date. Hope he continues his releases.