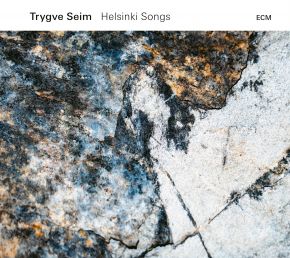 With its overt lyricism, strong themes and a sense of perpetual melodic invention, Norwegian saxophonist Trygve Seim’s new album quickly identifies itself as a classic-in-the-making. Themes of dedication run through Seim’s Helsinki Songs album, a set of tunes composed – for the most part – in the Finnish capital, and radiating tributes in many directions. Here are songs referencing Igor Stravinsky and Jimmy Webb, pieces dedicated to each of Seim’s gifted bandmates, and tunes that tip the hat, obliquely, to Ornette Coleman and Bill Evans. The quartet plays superbly throughout, with outstanding solos from leader Seim and pianist Kristjan Randalu. Helsinki Songs was recorded in Oslo’s Rainbow Studio in January 2018 and produced by Manfred Eicher.

Kristjan Randalu (featured)More information
Mats Eilertsen (featured)More information
Markku Ounaskari (featured)More information
Trygve Seim Quartet (orchestra)More information
14-12-2018 Jazzism
"Helsinki Songs. An ode to the place where he wrote the album. "As soon as I crawl behind the piano, the music flows from my fingers.""
01-11-2018 Jazzism
"Saxophonist Trygve Seim is one of those Norwegian musicians who knows how to get to the core with his emotional, lyrical tone and lyrical melodies."
12-09-2018 Jazzenzo
"The mood varies from melancholy to cheerful ('Morning Song'), but the music is always light and calm. The compositions require a lot of patience due to the slow pace, but 'Helsinki Songs' contains enough beautiful things to surprise you, such as the dazzling 'Nocturne' and the dreamy, groping 'Katya's dream'."
07-09-2018 Trouw
"But Seim is particularly impresses by the immediacy of his playing, it has great gentleness in it. This beautiful purity and fearlessness. The total absence of a pose. In this way Seims music gets, in the most positive sense of the word something childlike."
31-08-2018 Rootstime
"Beautiful and perfectly balanced."
27-08-2018 Le Soir
"Floating on musical clouds with these ECM releases"