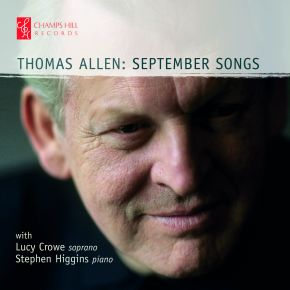 Sir Thomas Allen is an established star of great opera house around the world with a huge repertoire - with fifty roles at the Royal Opera House, Covent Garden alone – who has now recorded something completely different for Champs Hill Records. ·

September Songs is a chance to explore songs he grew up with, loved then and loves still, but repertoire that’s not usually associated with him, the golden age of Broadway and Hollywood with its melodic beauty, lyrical inventiveness and emotional directness.

Allen has always hankered to ‘give it a go’ and to explore songs by the likes of George Gershwin, Cole Porter, Jerome Kern and Kurt Weill. This period of music has so much allure and fascination for singers and musicians from all backgrounds, and he’s upfront about the criticisms that can so often be levelled against classical singers performing the Great American Songbook – that performers don’t give it the respect it deserves: “my feeling is that these songs are every bit the equal of the standard repertoire that we sing, and one must find the way of singing them… there’s an intimacy to so many of them that, in these simple versions for voice and piano, I know I have to try to capture.” “There are one or two in particular that are little operatic scenas in themselves, and I love trying to find what that scene is – that’s my challenge.”