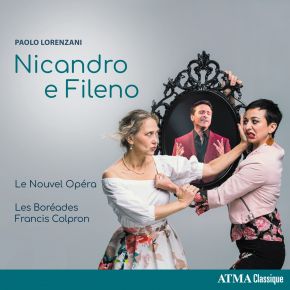 Le Nouvel Opéra and Les Boréades de Montréal have assembled an exceptional group of artists for the first-ever recording of Nicandro e Fileno, a pastoral opera by Paolo Lorenzani (1640-1713) first performed in 1681 before Louis XIV at the palace of Fontainebleau.
The manuscript is conserved in the Bibliothèque nationale in Paris. Canadian musicologist Albert La France prepared the critical edition of Nicandro e Fileno for the Centre de Musique Baroque de Versailles. Thanks to the initiative of Suzie LeBlanc and Francis Colpron, this opera was restored to life for this recording and for the 2017 performance in Montreal, with stage direction by Marie-Nathalie Lacoursière.
Le Nouvel Opéra is dedicated to the revival of the first operas of the Baroque period. Intergrating music, dance and theatre in its productions, the company has been praised for its originality and historical expertise in Canada and abroad. Its first CD, La Conversione di Clodoveo by Antonio Caldara, was released on the ATMA Classique label.
The ensemble Les Boréades was founded in 1991 by Francis Colpron, and specializes in performing Baroque repertoire with an approach that is authentic both in terms of period performance practice and the use of period instruments.

"
26-09-2018 Services for Music
"The Canadian ensemble Le Nouvel Opéra and Les Boréades bring this opera rarity with wit and passion to life, with a host of exceptional singers, especially the soprano Suzie LeBlanc."