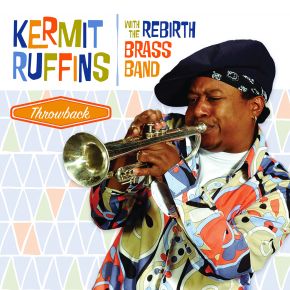 New Orleans native Kermit Ruffins was aptly born on the birthday of one of that city’s most deservedly heralded masters of music, Professor Longhair. The trumpet player came blasting out of high school with the Rebirth Brass Band. Formed with tuba player Philip Frazier, the ensemble stormed across 10 years, several continents, and 7 albums before [Kermit left the band] in 1992. Here reconvened, they’ve lost none of their exuberant flair and verve. The seven originals by Ruffins are mixed with numbers by the city’s current elder statesman, Mac Rebennack, as well as Ray Charles, Mildred Hill’s perennial “Happy Birthday,” and more. Unobtrusively produced, the set bristles with the immediacy of a true celebration. — David Greenberger

The reunion of the RBB with its original trumpet man-who left to get off the road and explore a solo career-explodes with the enthusiasm of a backyard barbecue, with everyone digging into the funk and singing along. Many of the songs are built on blues riffs or vamps, and when these guys start blowing it’s hard to sit passively during a hard-hitting groove like “Make Way for the Rebirth” or Dr. John’s “Mardi Gras Day.” – Mike Shanley, JazzTimes