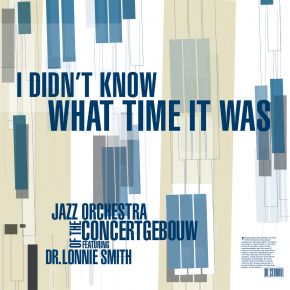 I Didn't Know What Time it Was

The Jazz Orchestra of the Concert-gebouw, the JOC, is used to working with famous soloists originating from different directions in the industry. These soloists bring their own repertoire, that is being arranged, prepped and performed in no time. In 2010, on a Thursdaynight in February, a unique concert took place in the Amsterdamse Bimhuis. Together with a living legends, whose name is pronounced with awe by musicians and audience. Dr. Lonnie Smith gave acte de présence, a culthero, who played on more than seventy records. In 1969, a prerecorded recordingsession with the formidable Thad Jones-Mel was cancelled. Four decades later, the JOC filled this gap with panache. For the Sultan of the Hammond organ, a long cherished desire to play with a big band was fulfilled.

Most noticeable on Smith in the Bimhuis, was not so much his head array, a skillful woven turban, as well his auditory memory and lucid, varied sounds he managed to wrest his impressive B3. The style and play of these Groove eminence appeared as constructive by being waylaid and routine wear. JOC knows what to do with its wonderful timbre blends and his shouts, his play with the right hand. This orchestra can glow with sovereign intensity, sparkle and fire, but manages to also add to the extremes of expression that can be produced by the Hammond organ. Of whispering vibrato and dreamy tone language, to roaring, orchestral violence. Questions have shot six delicacies attention to this LP. Two played compositions come from the hand of the doctor, Too Damn Hot and The Whip, a violent swinging backbeat hit, with masterful, muscular solos. A aubade to soul jazz, in a hot tub with a glass of cognac.