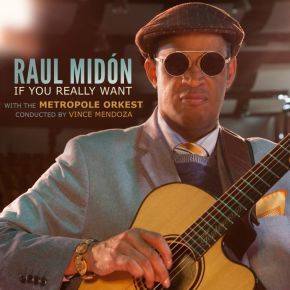 If You Really Want

The New York Times has called Raul Midón “a one-man band who turns a guitar into an orchestra and his voice into a chorus.” Now, with his exciting new album – If You Really Want, to be released via Artistry Music/Mack Avenue on September 14 – Midón’s voice and guitar ride the waves of an actual orchestra: the acclaimed Metropole Orkest, the GRAMMY® Award- winning Dutch ensemble that has collaborated with artists from Al Jarreau and Elvis Costello to Laura Mvula and Snarky Puppy. Midón – who earned his first GRAMMY nomination for Bad Ass and Blind, his Artistry Music/Mack Avenue album of 2017 – worked hand in glove on If You Really Want with another renowned GRAMMY winner and frequent Metropole Orkest collaborator: conductor-composer-arranger Vince Mendoza.

This past spring, Midón performed in National Public Radio’s popular “Tiny Desk Concert” feature, with NPR prefacing the broadcast by saying: “Raul Midón lives in a world of sound – blind since birth, Midón’s interpretation of his surroundings is borderless. He sings with the passion of the best classic soul singers, and his instrumental chops stand alongside the most accomplished jazz musicians.”

Vince Mendoza (conductor)More information
Metropole Orkest (orchestra)More information
14-06-2019 Jazzism
"If You Really Want has become an excellent album, also thanks to the fantastic arrangements by conductor Mendoza, who did four pieces."
10-06-2019 Jazzflits
""If You Really Want" is an overwhelming album that brings out the best of MO and her unique soloist.
A co-production with a wonderful intensity.
The album is a journey through time of atmospheres and associations."

21-09-2018 Written in Music
"If You Really Want brings together the fine musical craftsmanship of Raul Midón, Vince Mendoza and the Metropole Orchestra. This is the album you want from Raul Midón."