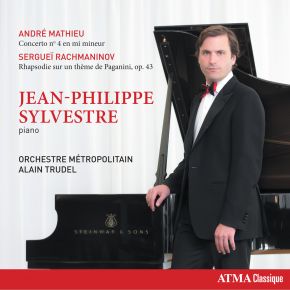 Following the enthusiastic response to the 2017 ATMA Classique release of the Concerto de Québec by André Mathieu, pianist Jean-Philippe Sylvestre returns as vigorous as ever with a new recording which, once again, features a work by Mathieu — his Piano Concerto No. 4 — and includes Rachmaninov’s Rhapsody on a Theme of Paganini. The recording was made during the Festival Classica with the Orchestre Métropolitain under the attentive direction of Alain Trudel.  Most recently, Jean-Philippe Sylvestre has performed with the Orchestre symphonique de Québec at Bourgie Hall and Place des Arts in Montreal, at Iles de la Madeleine, at St-Pierre des cuisines auditorium in Toulouse, Cortot Hall in Paris, and Palais des beaux-arts in Brussels. He recently appeared in concert in Montreal and  Halifax with such renowned musicians as Stéphane Tétrault, Alain Trudel, and Dominic Desautels.  Praised by La Presse for his “immense talent as conductor, musician, and performer,” Canadian conductor Alain Trudel has been the Orchestre symphonique de Laval’s artistic director for 10 years. In 2017, he was named musical director of the Toledo Symphony in Ohio. He is also Premier Guest Conductor of the Ottawa Symphony Orchestra, Principal Guest Conductor of the Victoria Symphony Orchestra, and guest musical adviser for the Manitoba Chamber Orchestra.