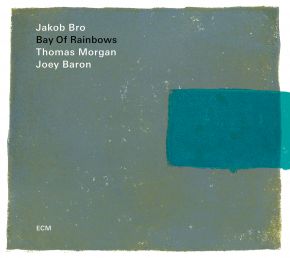 “There is no hurry to this music, but there is great depth,” observed London Jazz News about Danish guitarist Jakob Bro’s trio with two kindred-spirit Americans: bassist Thomas Morgan and drummer Joey Baron. This poetically attuned group follows its ECM studio album of 2016, Streams – which The New York Times lauded as “ravishing” – with what Bro calls “a dream come true,” an album recorded live in New York City, over two nights at the Jazz Standard. Bay of Rainbows rolls on waves of contemplative emotion as the three musicians explore five pieces from the guitarist’s catalog, with the gorgeous “Copenhagen” a favorite reprised from Gefion, Bro’s 2015 ECM release. Others – “Evening Song,” “Red Hook” and the volatile “Dug” – are recast intimately and elastically for trio after having been initially documented by larger ensembles. Bookending Bay of Rainbows are two versions of the richly melodic “Mild,” the abstracted second rendering illustrative of Bro and company’s ability to push and pull the music into mesmerizing new shapes, onstage and in the moment.

Jakob Bro (composer)More information
Thomas Morgan (featured)More information
Joey Baron (featured)More information
17-02-2019 De Volkskrant
"Rare close playing Jakob Bro Trio in the Bimhuis was no less than phenomenal (five stars)"
15-02-2019 Jazzism
"Wonder Guitarist gives jazz new life."
10-02-2019 Draai Om Je Oren
"All of such a high level that the predictable does not harm the music in any way."
14-12-2018 Jazzism
"It is unbelievable how Bro can sound big, compelling and bogus. Bay Of Rainbows is a wonderfully beautiful registration."
14-11-2018 Le Soir
"At ECM, guitars are airy, atmospheric, poetic. With a contained energy, which explodes sometimes. And a slightly nostalgic lyricism"
13-10-2018 Het Parool
"Bro is a guitar player who cautious amplifies his arpeggios with incitement to melody formation. He can not be caught for a second on jazz clichés. This creates beautiful, soft, vulnerable chamber music."
04-10-2018 Written in Music
"Bay of Rainbows is a wonderfully beautiful registration and again a Jakob Bro album that is an incredible must. And what do you get with listening to this beautiful album, you're really looking forward to seeing Bro, Morgan and Baron very soon."