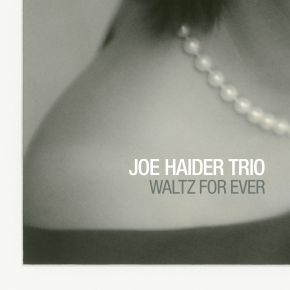 Worth Listening to Again and Again!
If you did not know better, you would shake your head in disbelief: Joe Haider was actually born in 1936. In other words, he was born in Darmstadt three years before the outbreak of the Second World War. During that World War, he danced waltz with his mother – his father was busy elsewhere. Later, the pianist Haider, who became familiar with European music tradition at a conservatory and African-American jazz aesthetics thanks to working with countless US luminaries, composed waltzes for all his wives; he was married a total of three times. Now, he is continuing to “waltz further” into the end of time. At any rate, this is suggested by the title of his sixth trio album, Waltz For Ever, which oscillates between wisdom and power.

Haider, a Swiss national by choice, is accompanied on this wonderfully varied album by two Swiss jazz musicians, who were born in 1980 (Claudio Strüby) and 1982 respectively (Raffaele Bossard). Bassist Raffaele Bossard is already a longtime companion of Haider and has already recorded four albums alongside the pianist.

As a companion, Bossard acts at the same time solidly and with agility, and his improvisatory digressions are characterized by a wonderful balance of gravity and virtuosity. For Bossard, the bass is a bass and not an oversized guitar. Bossard is omnipresent on the Swiss scene; among others, he is active in the groups Pilgrim of saxophonist Christoph Irniger, Mats-Up of trumpeter Matthias Spillmann and Plurism of drummer Dominic Egli. This is the first recording with Haider for the very busy drummer Claudio Strüby. Strüby has become known in recent years through his work in the crossover trio Rusconi, but has also cooperated with “elder statesman” Andy Scherrer. Strüby’s supple, punchy playing style, full of surprising accents, fits optimally into a piano-trio context.

The majority of the pieces on Waltz For Ever were composed by Haider. When composing, Haider is initially inspired by people, situations and stories. However, composing craftsmanship is required when working out the pieces, for example, in the choice of keys or in the thematic fine tuning. Katy’s Katzenvilla actually existed, and Haider remembers vividly even today how one day two cats carried a whole sack of sausages from the dining table over a fence into a nearby forest. Haider is a gifted narrator of anecdotes. Much of his lovely storytelling can also be found in his piano playing. Haider does not want to amaze his listeners, but instead enchant them. If you ask Haider about pianists who have influenced him, he first mentions two rather unfamiliar names: Claude Williams and Dick Twardzik. He also mentions Dave Brubeck, Sonny Clark, Tommy Flanagan and Bill Evans. Then there was McCoy Tyner as later influence. Actually, Haider is a forgiving type, and yet he remains unforgiving on some points. Consequently, a question mark can be added to the title The Reconciliation, Haider said. In fact, it is not a love, peace and harmony piece, but a rather attacking number.

When selecting the three pieces from the “Great American Songbook”, Haider was guided by personal reminiscences. He learned to love the ballad Darn that Dream listening to a version by the blind Spanish pianist Tete Montoliu. Haider used to play the song Nature Boy, which was made famous by Nat King Cole, in duo performances with the trumpeter Charlie Shavers. And Ev’ry Time We Say Goodbye was on his wish list after hearing a touching version by Ray Charles. Of course, the fact that this piece with the lines Ev’ry Time We Say Goodbye /I die a little receives an additional dimension at Haider’s age goes without saying.
But for now, his motto is: Now more than ever!
Tom Gsteiger