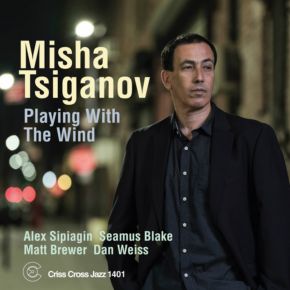 Playing with the Wind

As on Artistry of the Standard (Criss 1367) and Spring Feelings (Criss 1384), the St. Petersburg native---a U.S resident since 1993---teams with trumpeter Alex Sipiagin and tenor saxophonist Seamus Blake, both leaders of multiple  Criss Cross dates and internationally renowned practitioners of their respective instruments.

JoiningTsiganov for the first time on Playing with the Wind are bassist Matt Brewer (Mythology , Criss 1373, and Unspoken, Criss 1390) and drummer Dan Weiss, who apply their virtuosic chops to Tsiganov's elegant charts with an open, poetic attitude.