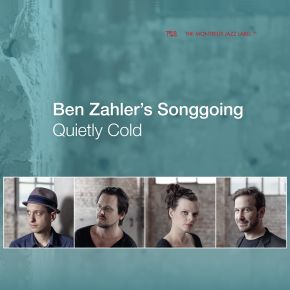 Quietly cold – the title of this album may be somewhat misleading, as the music is neither as quiet nor as cold as it suggests. Intense songs, a girlish-fresh, innocent-sounding voice, the concise flute -playing of the bandleader and a compelling, swinging groove: these are the outstanding features of this evocative, drum-less quartet.

It is the well - honed rhythm section made up by Thomas Baumgartner and Marco Nenniger that provides the ideal foundation on top of which voice and flute confidently layer their melody lines. Whether the pianist is establishing the base color or placing accents in his solos, or the bass player is providing the grounding for a ballad or getting into the groove with a counter-melody, Scott LaFaro-style: this duo seems joined at the hip. The experience of both Baumgartner and Nenniger extends beyond jazz projects, and at times they enter into a dialogue with voice and flute while at others they hold themselves back or even fall silent to provide space for the other two.

Isabelle Ritter embodies quite the opposite of the jazz singers of former times, whose voices were low and dark from smoke-filled clubs (and their own smoking habits), strong drinks, and the night- life in general. “Elisa Day” (which is the name of one of her projects) has been decorated with a jazz diploma and her singing is highly versatile yet consistently clear and sassy, lighthearted and child-like. Not that this hinders her in any way from coming across as authentic and believable in all songs, even on the track based on a poem from James Joyce’s “Chamber Music”, which evokes a mood as if entirely in a minor key. Yet the voice fits particularly well whenever the lyrics reveal a headstrong wit.

Bandleader Ben Zahler, aged 39 by now, studied in Bern with saxophonist Andy Scherrer, and these days he also teaches the instrument. Nonetheless, like his flute teacher in Bern, Günter Wehinger, Zahler is one of few contemporary musicians who play the flute as their main rather than their second instrument. Even if Eric Dolphy is his first point of reference, the flutist refrains (at least on this album) from experimentation and overblowing techniques on the flute. As a result he sounds more like Herbert Jay Solomon (alias Herbie Mann) - though not like the Mann whose albums regularly reached the billboard charts, whose streamlined, slightly sluggish and often somewhat superficial playing incorporated various ethnic styles, and who popularized the flute like few others. Instead we are talking about the humorous, lyrical Herbie Mann so well-liked by his top-class musical partners: from Thommy Flanagan, Bill Evans and Herbie Hancock via João Gilberto, Antônio Carlos Jobim, Sonny Sharrock, Attila Zoller, Jim Pepper and Ron Carter to Sarah Vaughan, Chet Baker and Stéphane Grapelli. Zahler’s playing is no-frills and cuts no corners, it is dynamic yet gentle, free of pretense and remains crystal clear even in virtuoso passages, it is emphatic, precise and distinct. Yet in spite of their strong presence, neither flute nor voice dominate the quartet.

With the exception of “Lullaby for the Wild” and “Andy’s Food Corner” (both composed by Thomas Baumgartner), all songs on the album were written by Ben Zahler. While the music is easy on the ear, it nonetheless has depth and not a little humor: the songs are contemplative, altogether beautifully rounded, intelligent and entirely honest, with magnificent dialogues and a convincing interplay between the four musicians: Quietly cold - but always on the move.
Steff Rohrbach