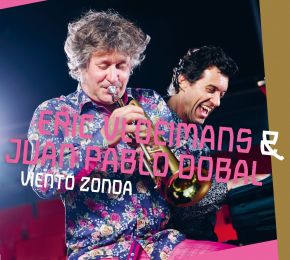 Viento Zonda - Eric Vloeimans' new adventure that exudes the warmth of the Argentine breeze along the Andes. The gentle, even tickling sensation surprises as Eric and his musical brother, the virtuoso pianist Juan Pablo Dobal takes the listener to new aural delight.

Eric Vloeimans (composer)More information
Juan Pablo Dobal (composer)More information
25-03-2019 Jazzthing 04 05 2019
"... A breeze of astonishing warmth that sometimes sluggishly drags around the mountains, then suddenly refreshes when Dobal puts a driving groove under Vloeimans' homage to the melody, to finally slacken and bring their instrumental voices back into harmony in a light chatty mood..."
14-12-2018 Jazzism
"Trumpet player Eric Vloeimans continues to amaze. After the successful adventures with trio Lavanter and the Holland Baroque ensemble, there is now a cross-pollination with pianist Juan Pablo Dobal. "Viento Zonda" breathes that sultry wind from Argentina."
14-12-2018 Jazzism
"Eric Vloeimans did it again with Viento Zonda! The trumpet player with the velvet tone continues to amaze."
01-12-2018 Jazz Bulletin
"Viento Zonda is a duo album on which we only hear the beautiful trumpet sound of Eric Vloeimans and the broadly blown piano playing of Dobal."
28-11-2018 Rootstime
"Vloeimans' music is like his name, fluent and full of melody and lyrical power, and at times velvety soft and whispering in tone."
22-11-2018 Jazzenzo
"Trumpet player Eric Vloeimans is the Sunday child of Dutch jazz. Everything he touches seems to change into musical gold, whether it is a project with film music, a baroque orchestra, world music or fusion. His latest shoot on the tribe is an artistic collaboration with the Argentinian pianist Juan Pablo Dobal, a piano wizard: 'Viento Zonda'."
10-11-2018 Het Parool
"Fabulous Trumpet sounds magical!"
09-11-2018 Mania
"Vloeimans' liquid and colorful trumpet sound eagerly curves around the warm piano registers, over and over again. And that is no different on Viento Zonda, the album he recorded with Juan Pablo Dobal."
07-11-2018 JazzNu
"Being on stage and being allowed to play and share my own songs is the greatest happiness that comes to me."