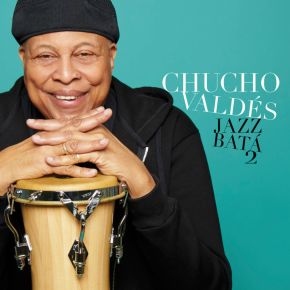 Jazz Batá 2, composer, pianist and bandleader Chucho Valdés’ first album for Mack Avenue Records, marks a new peak of creativity for the artist, even
as it revisits the small-group concept of his 1972 Cuban album Jazz Batá. Recorded in two and a half days at John Lee’s studio in New Jersey, Jazz Batá 2 is both rhythmic and lyrical at once. The six-hand complexity of the batá repertoire – the deep classical music of West Africa – permeates Valdés’ piano solos throughout the album. “I applied to my solos the different rhythms of the batá,” he says. “The piano is of course a harmonic instrument, but it’s percussive too, and you can play percussion with it.” Jazz Batá 2 also marks the centenary of Valdés’ father and teacher, Ramón “Bebo” Valdés (1918-2013). These two giants of Cuban music shared a birthday– October 9 – so Bebo’s 100th will be Chucho’s 77th. Between the two of them, they’ve exercised a massive musical influence since the 1940s. This stretch of time reinforces the enduring and magnificent career Valdés has cultivated over the 77 years of his life, with no signs of slowing down.