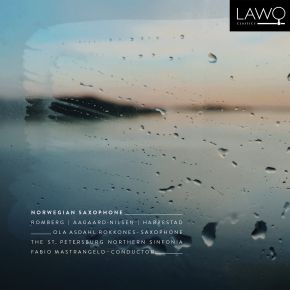 “Norwegian saxophone” is the first classical album from the versatile artist Ola Asdahl Rokkones, containing three world premiere recordings. Recorded in the legendary LENDOK Studios in Saint Petersburg, together with conductor Fabio Mastrangelo and The St. Petersburg Northern Sinfonia, this is a unique release of new Norwegian music for saxophone and orchestra.

“The Tale of Taliesin” by Martin Romberg (2009), “Bør” by Torstein Aagaard-Nilsen (2014) and “Un rêve Norvégien” by Kjell Habbestad (2002/2015) have all been commissioned by Rokkones. Although the composers have been inspired by literary works, the music showcases the classical saxophone in three very different musical surroundings. With the saxophone as a narrator, we explore the ancient Celtic legend about Taliesin in a large orchestral work, the existentialistic poem “Bør” by Stein Mehren in a contemporary and experimental soundscape, and finally the famous visionary poem “Draumkvedet” where folkloristic elements fuse with a modern classical orchestral treatment.

Following a long and twisted path, this recording is the result of a process that has taken many years – for Rokkones' part almost half a lifetime, as he commissioned the first work in 2001 at the age of 18.

Ola Asdahl Rokkones (b. 1983) lives in Tromsø in the north of Norway, and is one of few saxophonists working both within classical music and jazz. As a classical musician, he has appeared as a soloist with several renowned orchestras in Norway, Russia, Germany and France, among them the Mariinsky Symphonic Orchestra. He has commissioned and premiered music by numerous composers. As a jazz and ensemble musician he is highly profiled through several groups. In 2010 he was selected as the Norwegian representative to the prestigious European Jazz Orchestra. He has contributed on six album releases. He has also worked with various dance- and theatre ensembles.