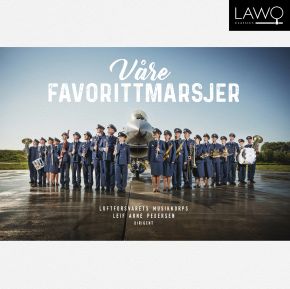 Marches are a large and significant part of the Norwegian military band tradition. Here we have collected marches that differ in origin, character, and importance. They are marches that we like to play and hear, and, we hope, that you the listener will appreciate.
– Leif Arne Pedersen, conductor

Humans are the only animal species capable of moving as one body in time to dance or march music. When the Ottomans conquered parts of southern Europe in the fourteenth century, they had elite soldiers marching in the lead and playing on shawms and numerous percussion instruments. Known as Janissaries in Turkish, they were the first to call attention to march music. The march was to gradually develop into a piece of music in set form featuring easily recognizable melodies and countermelodies and based on eight and sixteen-measure periods.

Many marches came to be regarded as military marches used both in war and peacetime. “An army’s strength is tripled with the help of march music”, a well-known general once said. Likewise, the well-known composer of marches, John Philip Sousa, declared that he “would rather be the composer of an inspired march than of a manufactured symphony.” Existing marches are virtually countless in number and equally so the occasions on which they were composed. Scarcely another form of music depicts all sides of human life as does the march.

The Royal Norwegian Air Force Band is celebrating its bicentenary in 2018. At its main venue, “Byscenen” in Trondheim’s city centre, the band has performed with Tine Thing Helseth, Silya Nymoen, Wolfgang Plagge, Ole Edvard Antonsen, and the jazz band Come Shine. The band's watchword is “No genre unfamiliar to us”.