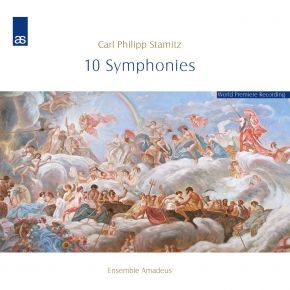 As a world premiere recording, the label auris subtilis edits ten of the symphonies by Carl Philipp Stamitz (1745-1801), most of them written in Paris, in a double CD and with a musicological introduction by Alexander Keuk. Carl Stamitz has so far been little researched and edited, is therefore likely to find a high interest in classical music lovers and satisfy their hunger for new and previously undiscovered.

For more than twenty years, Normann Kästner and amateur and professional musicians from the Chemnitz / Zwickau region have been passionately dedicated to the repertoire of classical and early classical music. The ambitious result of the research and the set-up by Normann Kästner and a multitude of rehearsals, the recordings and concerts of the Ensemble Amadeus can be heard and admired with the present recording. We wish the musicians and the lovers who hold the CD in their hands so much joy.

Carl Philipp Stamitz (* in Mannheim 1745, † 1801 in Jena) is one of the outstanding composers of the second generation of the so-called “Mannheim School”. In addition to his brilliant and highly-accomplished compositional craft, he was esteemed as a virtuoso on the violin, viola, and the viola d’amore, composing many concerti and pieces of chamber music for the latter instrument just as it was gradually disappearing from musical life. Carl Stamitz was the oldest son of the Bohemian-born composer Johann Stamitz who had developed a groundbreaking style: the “Mannheim School”.

His son Carl was a second violinist in the court orchestra (Hofkapelle) from 1862 to 1770. He received instruction in violin and cello from his father. After his father’s untimely death in 1757, the composers and virtuosi Christian Cannabich, Ignaz Holzbauer and Franz Xaver Richter assumed responsibility for Carl’s musical education in Mannheim. Cannabich had succee-ded Johann Stamitz as the director of the Hofkapelle and led them to highly- acclaimed successes throughout Europe, which later even motived Wolfgang Amadé Mozart to undertake a year-long visit there.

In 1770, Stamitz moved to Paris with his younger brother Anton, and became the court composer of Duke Louis de Noailles. It was also here that the Symphonies presented on this CD were composed, presumably those up until Op. 24, which is dated later.

Editions of the scores and parts for the recording: Arnfried Kaiser, Normann Kästner