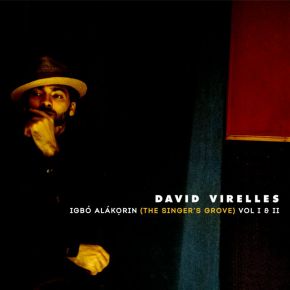 Igbó Alákọrin (a phrase in Yoruba which can be loosely translated as The Singer’s Grove) is the realization of New York-based pianist David Virelles’s long-held dream to document the under-sung musicians of his birthplace, Santiago de Cuba. Virelles, who was named the #1 Rising Star Jazz Pianist in the 2017 Downbeat Critics Poll, is one of the most in-demand pianists on the contemporary jazz scene, recording with the likes of Henry Threadgill, Chris Potter, and Tomasz Stanko. He also has five prior releases under his own name, including Continuum, which topped the New York Times best album list for 2012. Legendary Cuban pianist Chucho Valdés calls Virelles “an innovator and a perfectionist, a young virtuoso who is the most creative and advanced of our jazz pianists.”

The picturesque town of Santiago in the Oriente region of south-eastern Cuba has historically been an important breeding ground for music on the island. Oriente is home to a wide variety of genres, including son, changüí, nengón, conga, as well as traditions inherited from Haiti. Since leaving home in 2001, each time Virelles returned he would make it a point to reconnect with the elders of Santiago’s rich musical tradition, many of whom he knew as family friends through his parents who are also musicians. This project is an opportunity for him to shine a light on some of these musicians, many of who rarely received recognition beyond Santiago, but remain arguably amongst the last living resources from Cuban music's golden era. It’s a homecoming that documents a collaboration with roots in family, community and culture.