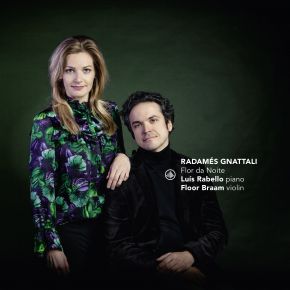 Luis Rabello: “The music of Radamés Gnattali (1906-1988) stands very distinguished on the Brazilian classical music landscape given the composer unique background: a hybrid of classical virtuoso pianist, composer of symphonies, concertos and sophisticated chamber music and popular composer who immensely contributed to different musical styles in the Brazilian music scene such as the samba, choro, bossa nova and the Brazilian jazz.

Gnattali started his career as a classical pianist and was considered one of the greatest virtuosos of his generation. He spent a great part of his life as the composer, arranger and conductor of the National Radio orchestra in Rio de Janeiro.

Gnattali’s widow surprised me with an unexpected present when she allowed me to take the digital copies of all music Gnattali has written for piano, that included solo, chamber and concertos. The present album is a fortunate consequence of that!
The album Flor da noite brings to the public the very first recording of Gnattali's entire repertoire for violin and piano.

This is the first time I hear from this composer. It is asking for a further and more intense contact. What a beautiful sound and arrangements played by these exceptional gifted musician. I want to hear more.

Floor Braam (featured)More information
01-06-2019 Gramophone
"Pianist Luis Rabello is a sensitive partner and does a terrific job in the solo pieces, many of which are quite intricate and have the quality of jazz improvisations."
10-01-2019 De Volkskrant
"Together with violinist Floor Braam, Rabello recorded an album that Brazilians can be proud of."