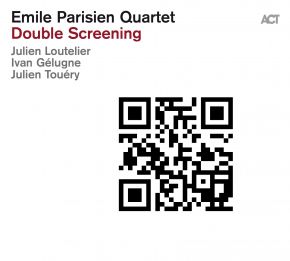 In those rare spare moments when we are without our smartphones, tablets and all those other connected screens, anyone with the slightest tendency to philosophize is going to ask themselves a question: is there actually any space left for us as individual human beings under this torrent of bits? Can we improvise in a world where everything is predetermined by algorithms? Does poetry still have the right to be heard in the age of artificial intelligence?

These are questions which the Emile Parisien Quartet have answered as only they can: through their music! Throughout this “Double Screening”, the four explore the mysteries and labyrinths of our hyperconnected universe with their unique mixture of untrammelled fantasy and dry humour. Their portrayal of it is precise yet poetic, and they do it in real time - and yet with real emotion too. We witness messages crossing, there’s musical spam, viral degradation, social interaction. But if you’re expecting to hear the sound of a lap top, sampling, a drum machine or some other electronic gizmo here, you won’t. This group remains faithful to the sound-world which has served it well for the past thirteen years.

The musicians prefer to broaden the range of possibilities of their traditional instruments by providing their own occasional twists on them; so Parisien uses reed slaps, Julien Touéry has a prepared piano, Ivan Gélugne produces scraping sounds with his bass bow... And at the drums Julien Loutelier, the newest recruit, has hacked his way into the heart of the group's operating system, enabling him to subtly shift the balance and the dynamics of the ensemble, and to make them flexible and reactive in a new way. Each individual track is like an amazing little sound machine, all the more fascinating because it evokes our modern digital era so well without use of the technology.

And there is another paradox at work too: the quartet takes their inspiration from a world made of the ephemeral and the instantaneous, but as they do so they are also testing to the limit their predilection for long forms. This is something they have been developing ever since they began, with suites in several movements interspersed with intermezzi full of feeling. That said, perhaps paradoxes are inherent in this music which is both serious and light, wild and controlled, lyrical and avant-garde? In conclusion, you are welcome to “like” it, “share” it, comment on it... but first and foremost you should listen to it!