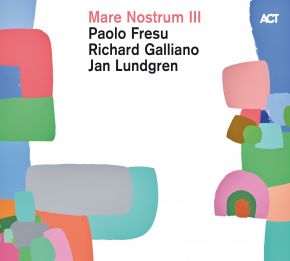 All good things come in threes, they say...

...and in fact the idea of a trilogy of albums – a first recorded in Italy, a second in France, and a third in Sweden – has been present in the minds of these three musicians ever since they first started working together.

What might appear as a vapid marketing idea is the genuine result of the shared musical identity which they have continued to develop together.

The three top-flight musicians Paolo Fresu, Richard Galliano and Jan Lundgren have a great deal in common: each is a superb instrumentalist in his own right, all three of them have a love of melody as their hallmark; and they also draw on the rich musical resources of their native countries, Italy, France and Sweden.

For over 12 years they have been playing together at the highest level, their incomparable sound is the inspiration for an ever-growing audience in countless countries, and they perform in the world’s most renowned concert halls.

So it came as no surprise to me as the producer of this session when the question arose spontaneously and more or less simultaneously: when are we going back into the studio together?

Once again it was a pure pleasure to see the sheer ease with which Paolo, Richard and Jan can create such great music. The results have a completely natural flow and the joy of making music together is palpable.

And as to the question of whether this is still “jazz”, it really doesn’t need to be asked: “Call it anything” said Miles Davis way back when – and how right he was!