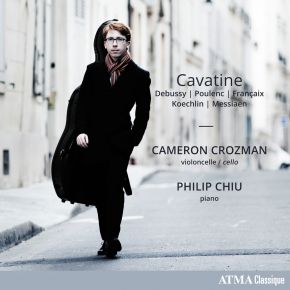 Cavatine, the debut album of cellist Cameron Crozman and pianist Philip Chiu, explores the refined world of French music in the first half of the 20th century. Framed by the great Sonatas of Debussy and Poulenc, the programme includes lesser-known works by Messiaen, Koechlin, and Françaix. Together, they paint a vivid picture of the multitude of styles — from the impressionist to the surrealist — that defined the era.
Described as a “mature artist with a profound musical imagination,” (Toronto Concert Reviews), Cameron Crozman is being hailed as one of Canada’s leading young cellists.
Maintaining an active performance schedule in North America and Europe, engagements have taken Cameron to such prestigious venues as the Shanghai Oriental Arts Center, Berliner Philharmonie, Paris Philharmonie, Philadelphia’s Mann Centre, Montreal’s Maison Symphonique, and Canada’s National Arts Centre.

Olivier Messiaen (composer)More information
27-02-2019 The whole note
"A calm, soaring and meditative cello melodic line over quiet piano chords, it perhaps loses some of its effectiveness outside of the context of the complete work, but nevertheless is a beautiful ending to a highly commendable CD."