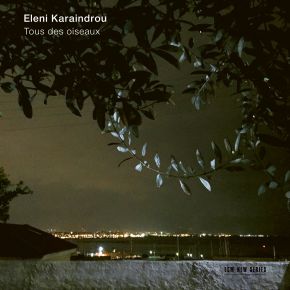 Greek composer Eleni Karaindrou’s new album draws upon music created for two special projects: Tous des oiseaux, a play by Lebanese-Canadian writer Wajdi Mouawad, and Bomb, A Love Story, a film by Iranian actor-director Payman Maadi. Tous des oiseaux, has won great acclaim for its bold exploration of the complex web of cultural identity; Karaindrou says of the play that it opened new horizons and broadened her perceptions. Meanwhile, Bomb, Eleni’s first new cinematic collaboration since the death of Theo Angelopoulos, has just been nominated for an APSA award for Best Original Score. Both works feature compositions for string orchestra and Karaindrou’s cast of gifted soloists. In what is now a thirty-year tradition, extending back to the Music for Films recording of 1990, Karaindrou’s luminous themes and arrangements acquire new contours and continuity through the mixing and editing of producer Manfred Eicher.