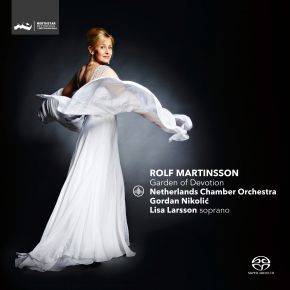 Rolf Martinsson is one of Sweden's internationally leading composers. In this CD five works are gathered.
One work is for soprano and string orchestra: Garden of Devotion is a collection of poems by Rabindranath Tagore set to music by Martinsson in 2013.

In To the Shadow of Reality, the soprano is istead accompanied by string quartet in these five songs with lyrics by Swedish poetess Karin Boye.

A.S. in memoriam is a piece for string orchestra. Composed in 1999; it is a homage to Arnold Schoenberg.
A piece called Landscape for solo violin is dated 2010 and takes its inspiration from The Strand, a painting by Edvard Munch.
The disc closes with a work for chamber orchestra, Kalliope, composed in 2004.

Netherlands Chamber Orchestra (orchestra)More information
21-10-2019 Nieuwe noten
"Martinsson not afraid of beautiful melodies and dramatic, sometimes dark effects. Something that we immediately notice at "Garden of Devotion, opus 97", that he based on poems by the Indian poet Rabindranath Tagore and he wrote with Larsson."
30-09-2019 Music Web
"Her expressive, pure sound is good for this idiom."
19-02-2019 HRAudio
"I’m sure that in Lisa Larsson’s interpretation these five songs will win many hearts."