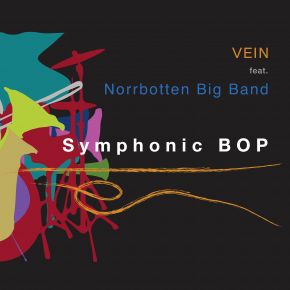 Only a piano trio? Whoever tries to get behind the mystery of the brothers Michael Arbenz and Florian Arbenz as well as the bassist Thomas Lähns with this question has not understood the principle of VEIN yet. The cheerful band concept from Switzerland has always been more than that: a sound surface for provocative color combinations, a testing laboratory of modern music, a vehicle for mutual inspiration, as impressively evidenced by a number of high-profile collaborations with prominent guest musicians such as Greg Osby and Glenn Ferris. As if the three had not already ascended to seemingly unattainable heights with their unorthodox laboratory work on the pieces of the classical composer Maurice Ravel (“VEIN Plays Ravel”; DMCHR 71179), the 13th CD announces another great achievement in which one can take the title literally. “Symphonic Bop” integrates a piano trio into an orchestra for the first time, in this case the Norbotten Big Band. Or the other way around: Because VEIN pursues a principle that has already proven itself in the past.

“Our earlier idea that the trio invites a guest was to be reversed this time by expanding the trio music with a big band,” Michael Arbenz explained. “Consequently, the trio is the soloist.” A noble, rather daring idea, which can also fail, because the danger that the small, chamber music ensemble will completely disappear in the gigantic orchestral storm underlies the project. But from the very first moment of planning, VEIN made sure never to lose the thread or control. “We used only our own compositions for this CD,” the pianist emphasized. “As a result, the identity of the trio is set from the start. Keeping this flexibility helps to make sure that the trio is still very present in the middle of the orchestra, and the music sounds completely VEIN!”

The Norbotten Big Band from Swedish Luleå under the direction of Joakim Milder proved to be an ideal partner in this vexing game between chamber musical nuances, bop meters and symphonic interludes. It is considered one of the most renowned orchestras in Northern Europe and gained popularity thanks to collaborations with Carla Bley, Randy Brecker, Dee Bridgewater, Kurt Elling, Joe Lovano, Chris Potter, Maria Schneider, Toots Thielemans and Django Bates. It was even nominated for a Grammy in 2011 with the trumpeter Tim Hagans as the leader. Michael Arbenz raves about his new “guest soloist” in superlatives: “The Norbotten Big Band not plays operates at the highest level, it also has an extremely diverse sound culture. In addition to the regular big band instruments, the musicians also play tuba, all clarinets up to double bass clarinet and flutes.”

Arbenz, Arbenz and Lähns had nothing less than the quadrature of a circle in mind. The music was always designed from the perspective of the trio despite the complex possibilities of arranging, Michael Arbenz stated. The three of them were helped by their classical training, because they treated the large body of sound more like a symphonic orchestra than a traditional American big band. “The playful element, the unpredictable, the interaction was important to us. It is a paradox to pack all these elements into one arrangement. However, we found that this creates interesting new ideas and opportunities.” A prime example here is “Fast Lane”, which develops purely from the trio and gradually grows into a ripping stream of sound colors, wind sets and rich grooves. Each of the pieces rotates, meanders in a different direction: “Boarding The Beast”, “Willi's Pool”, “Under Construction”, “Passacaglia” and “Groove Conductor”. A trio in the middle of an orchestra. Or an orchestra in the middle of a trio. Never was the truthfulness of "best of both worlds” as true as in the case of “Symphonic Bop”.