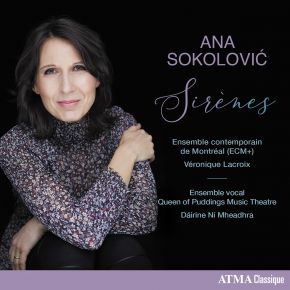 ATMA Classique presents an evocative musical portrait of Canadian composer Ana Sokolović. This new recording features the Ensemble contemporain de Montréal, soprano Florie Valiquette, mezzo-soprano Krisztina Szabó, and vocal ensemble Queen of Puddings Music Theatre. The human voice is at the heart of Sokolović’s work, so that it is fitting that her vocal works Sirens, Tanzer Lieder and Pesma are featured on this ATMA debut recording. Evta, a concerto for violin and ensemble, is included and features Andréa Tyniec as soloist.

Krisztina Szabó is highly sought after as an artist of supreme musicianship and stagecraft. She has a passion and commitment to the performance of contemporary music, particularly Canadian works, and has worked closely with many prominent Canadian composers.Known for her “exceptional assurance, musicality, and intensity” (La Presse).

Andréa Tyniec pursues a career both as a soloist and a collaborator in multidisciplinary productions integrating theatre, dance, cinema, and the visual arts.

“An imaginative and committed soprano with ravishing high notes,” ( La Libre Belgique), Florie Valiquette is a Canadian singer on the rise. In  2015, Florie attracted attention at the Festival d’Aix-en-Provence singing the role of Milica in the new production of Svadba, an opera by Ana Sokolović.

Sokolović’s lyric works have won over the hearts of audiences around the world. Her prolific repertoire is steeped in her Serbian roots and reflects the influence of different art forms. The force of Sokolović’s imagination moves through her music, highlighting the universal, theatrical character of her compositions.