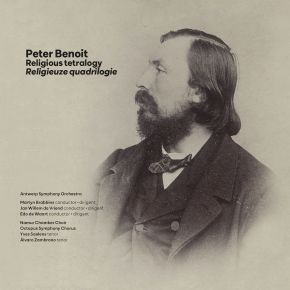 Recording for the Religious Tetralogy started in 2015, and continued for four years at various locations in Antwerp. Messe solennelle, Te Deum and Requiem were performed in the Cathedral of Our Lady in Antwerp, during the 2015 and 2016 traditional cathedral concerts. Noël was recorded a year later, in 2017, at the Church of St. Charles Borromeo in Antwerp. Each performance was led by a different conductor: Martyn Brabbins (Messe solennelle and Te Deum), Edo de Waart (Requiem) and Jan Willem de Vriend (Noël).