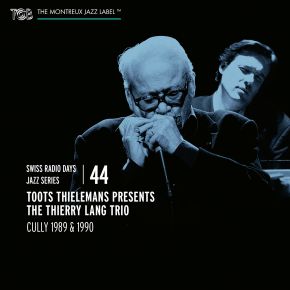 Swiss pianist Thierry Lang has always admired Toots Thielemans with great affection and sincerity. Thus it was only a matter of time for the two to work together. This happened when, in 1989, Toots Thielemans and the Thierry Lang Trio got together for a great concert at Cully Jazz Festival. The result was so special that the promoter of Cully Jazz Festival decided to repeat the experience the following year, something quite rare in the programming of any festival. This never-released-before-material was recorded by Radio Suisse Romande (now the RTS, Radio Télévision Suisse) and contains tracks from both events.

“Our meeting was the almost inevitable result of our common admiration for Bill Evans’ harmonic and melodic world. And Bill is still a mentor whose influence Thierry never hides.”
Toots Thielemans

“There have been important and enriching encounters throughout my career which have enabled me to become the person I am. The one I enjoyed with Toots has been one of the greatest music lessons of my life. The first notes we played together were so intense and so magical that I would have wished time to stand still.”
Thierry Lang

Next Sunday, the 12th, it's Mother's day. To celebrate this day with you we have made a Mother's Day selection for all music loving mothers. We offer a 15% discount on: Valentina Tóth - Hungarian Horizon    Cor Bakker - Elettra Due Shanti Snyder - Cloud 9 Lucia Aliberti - Early  Verdi Arias Toots Thielemans - 90 Years Valentina Tóth "In my parents’ house I often heard Hungarian folk music. I thought it was something truly special. Hungarian ...