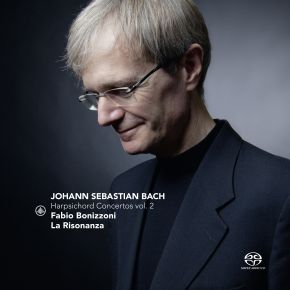 Here is the follow-up to the critically acclaimed first volume of Bach’s Harpsichord Concertos by Fabio Bonizzoni and his group La Risonanza.

Some critics’ quotation on first volume.
For a single CD of these four keyboard concertos, there’s no preferable recording available. - Musicweb
Harpsichordist Fabio Bonizzoni does a credible job in integrating the concertos so that they appear not as a soloist versus the ensemble, but rather as an integral part. – Fanfare
Bonizzoni achieves the difficult task of combining subtle artifice and interpretative joie de vivre with a manner that appears natural and uncomplicated […] enticing for its musical strengths. – Gramophone

La Risonanza (orchestra)More information
01-11-2019 Scherzo
"Bonizzoni, musician with excellent technique and musicianship, has inherited from his teacher and mentor, Ton Koopman, a lively, fresh, clean and - naturally - very Italian way of playing. Such qualities, enhanced by a sound recording of great transparency, shine along the entire programme. Excellent accompaniment one-to-a-part, ideal line-up that allows a perfect blend between the soloist and the ensemble."
03-05-2019 Mania
"A nice broad recording, in which the homogeneity of this small ensemble comes fully into its own."
15-04-2019 HRAudio
"Taking into account the difficulties of recording under the aural constraints such a venue poses, the result is remarkably good, though favouring the lower end of the sound spectrum."
10-04-2019 Stretto
"Contagious rhythms, set in passionate teamwork, in combination with a perfect sound reproduction, makes this recording into a party."