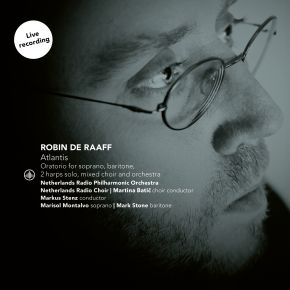 Robin de Raaff completed Atlantis in the summer of 2016. The work is one that predominantly seems to progress from light to dark, with voice and instruments frequently melding into an overall sonority. That said, where the text is of major significance, De Raaff uses the voice as a lyrical element to let it soar above the orchestral timbres. To a large extent, Atlantis is based on "Atlantis", the final poem in Hart Crane's collection Bridges. Boulez, the last surviving giant of post-War modernism, passed away while De Raaff was working on Atlantis. "Boulez was the great proponent of modernism. The island that modernism actually was simply disappeared when he died. This is why I felt a homage would be appropriate." As De Raaff has the tonal focus descend more or less chromatically for each stanza, a feeling arises of a sinking movement. He also makes the feeling of sinking away below the mirror surface of the ocean musically understandable by using ever darker sounding instruments. The oratorio Atlantis is not just an argument for the use of contemporary vocal skills as an element of the entire history of music, but also and primarily a warning about stewardship of water and the future of our planet.

"
31-05-2021 Scherzo
"The interpretation of the American soprano Marisol Montalvo is splendid and so is that of the British baritone Mark Stone. [...] Atlantis is not only an argument for the use of contemporary vocal skills as an element of all musical history, but also a warning to better manage our planet."
04-12-2020 Luister
"Although a live recording is of course never flawless, the Radio Philharmonic Orchestra plays excellent and the Groot Omroepkoor sings amazing."
19-11-2020 Mania
"According to De Raaff, with the death of Pierre Boulez, the island of modernism has disappeared, just like Atlantis sunk in the sea, hence the homage to him."
16-11-2020 Opus Klassiek
"In summary: no less than an enormous sensation to experience this CD, which really gives you the feeling of sitting in the hall. I did not experience the - well-deserved - applause as a disadvantage, quite the contrary! "

"The technical recording result - a tribute to Bert van der Wolf and the composer who was also explicitly involved in the mastering - has the same qualification as the performance. Excellent!"

13-11-2020 Music web International
"The orchestral playing is certainly brilliant and precise."
07-11-2020 Musique classique & Co
"A great success and a remarkable work."
06-11-2020 Mania
"
On the recording of the concert on 23-9-2016 in Tivoli Vredenburg in Utrecht, the American soprano Marisol Montalvo, the British baritone Mark Stone and the Netherlands Radio Choir shine in singing leading roles.
"